On Sunday May 1st, Ruth and I went over to the war memorial in Queens Park to listen to Caroline give one of her regular Carillon recitals. For the uninitiated, there's a website all about this rare and extraordinary musical instrument to be found here.
While we watched the master at work, Ruth noticed a photograph within one of the information boards opposite the clavier. It appeared to show a bell with an inscription implying that it was a gift from the Loughborough Male Voice Choir. With my curiosity aroused, I had to go and have a look for it!
Risking punctured eardrums, I climbed the steps to where the bells are hung and after a few minutes I located the bell in question and took a couple of photos:- 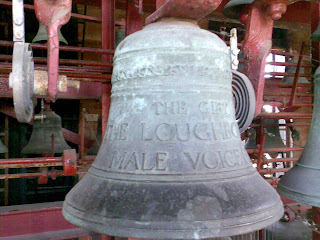 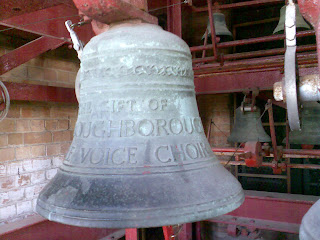 The inscription reads " THE GIFT OF THE LOUGHBOROUGH MALE VOICE CHOIR".
Intriguing! The first recital of the Loughborough Carillon was on 22nd July 1923, but the Loughb﻿orough Male Voice Choir didn't come into existence until 1967. So, perhaps new bells were added or maybe some re-cast at some stage after 1967?
Actually, it seems the answer to this apparent puzzle is a little simpler than that. A quick chat with Chris Hill before last Thrusday's rehearsal shed some light on it. It would seem that while the current incarnation of the Loughborough Male Voice Choir didn't come into being until 1967, there was a male voice choir present in Loughborough in the early 1920's and it was this group that funded this particular bell right at the beginning of the life of Loughborough War Memorial tower and its Carillon. The bell seen in the photographs above is the original bell as installed back in the 1920s.
As Chris says, I think our current choir can justifiably lay claim to this bell! After all, we are Loughborough's Official Male Voice Choir and the bell has our name well and truly on it! I now feel the urge to delve a little into the history of Male Voice Choirs in Loughborough. It would be nice to find out something about the funding of this Carillon bell by the 'original' LMVC, when the choir formed and why it disappeared. If anyone has any information or memories of earlier choirs in Loughborough, do drop me a line.
Ooh, I feel a book coming on!!!
Cheers,
Alyn.
Posted by Alyn at 22:13