Exam results, more solos and singing with a dog on my head.

First of all, apologies for the delay in posting this latest effort, but I’ve been impatiently waiting for my exam result. Mr Grumpy could’ve given it to me on the day if he wanted to, because I saw him get his calculator out to add up my marks. So I’ve been on tenterhooks (what is a ‘tenterhook’ anyone know?)  for a whole fortnight.


Thank heavens for that. I’ve had nightmares for weeks about becoming Caroline’s first ‘exam failure' (she proudly boasts a 100% success rate on her website), but such worries were needless as I passed with 112 marks out of 150. Absolutely over the moon, I have to say.


This is all rather crazy when I stop to think about it all. In just over twelve months I’ve changed from a shy, nervous ‘scaredy-cat’ who wouldn’t so much as say ‘hello’ to a group of more than two people, into this lunatic that can’t stop singing. What’s happening to me?


So manic have I become that I’m even volunteering to do solos now! Yeah, ME! I’ve now put myself forward to sing a solo verse for the male voice choir. Chris Hill has introduced a new folk song called Pleasant and Delightful which is designed to be a light hearted, audience participation number and requires four choir members to sing a verse solo and therefore four volunteers are required. Me, me, ME! I just can’t help myself at the moment, it’s like a disease. When Ruth said to me in the kitchen recently, “would you like a pitta?” I responded with “I gotta pitta pocket or two, boys, I gotta pitta pocket or two”, in Fagin style.  I think I need some sort of therapy!


Anyway, I’m earmarked to sing verse 3, which should be interesting. The last line of each verse constitutes the chorus which everyone can sing along too, so should be great for getting the audience involved. Chris Higgins will sing the opening verse, Dave Weston will do the second, me the third and David Booth the last. Definitely not to be missed. Get your tickets for the West Leake gig now ladies and gentlemen!


Caroline has given me my Grade 4 Certificate and it really is quite impressive. I’ve also received the report with Mr Grumpy’s feedback which makes interesting reading. In Caroline’s opinion he was particularly harsh and clearly wasn’t going to just give marks away. Anna-Ruth, who was doing her Grade 7 and passed with 117, was particularly disappointed to miss out on a Merit by just 3 marks. So knowing all that only makes me prouder of my achievement.


Just to give you a flavour of his comments, of my fist song, Caro Mio Ben he said “Intonation was not always entirely centred, but this was a measured account, though it could have greater colour”. Okay, fair enough but given my opening song nerves, entirely understandable I think.


Of An Die Laute, he says “… upper notes lacked focus and clean intonation.” Well, maybe but I defy anyone to give ‘nachbarn aber nachbarn nicht’ entirely clean intonation!


One comment I am pleased about is regarding the dreaded unaccompanied rendition of Barb’ra Allen. He said “sung at a good speed and the story was well told”.  That was what I was aiming for so I’m glad it came over despite my mistakes. And the best comment of all was to read that my sight reading was “a broadly accurate and steady reading.” So perhaps, as I’m continually told by my wife and Caroline, I really am quite good at sight reading! Will I do another exam in the future? Well, Caroline says so, so I guess I will.


So what else has been happening? Well preparations for two concerts in April are well underway, one for the male voice choir as I’ve just mentioned and one for Caroline Sharpe Singers on Friday April 20th in Kegworth. The former will feature some new pieces including the folk song described above and the Hollies song He Ain’t Heavy’ which is sounding really good now. It should be a very varied programme and quite different to any previous concert I’ve done with the choir, so I’m really looking forward to it.


The Caroline Sharpe Singers concert should also be exciting as it features some great new songs and a particularly cheesey but potentially splendid CSS/Enchanted joint rendition of I Believe. Trust me, if this one comes off  it will be spectacular! Additionally, the concert will feature a solo from a promising local bearded tenor of On the Street Where you Live. Ahem! Now as you know, I have numerous bad singing habits that Caroline has had to beat out of me over the weeks and months. To cure the bizarre twitching leg she adopted the use of the wobble board. Well another terrible habit I have is to tilt my head back when trying to reach a high note. Not at all attractive I’m sure. So during last Wednesday’s lesson, Caroline introduced the dog! No, not her dog Poppy, but a kind of heavy ‘bean-bag’ toy dog. This ‘dog’ is placed on top of one’s head thus:- 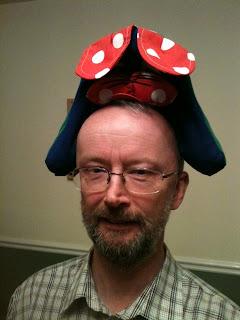 Me with dog on head. It is a dog honestly!
Now, with dog on head one proceeds to sing. As the high passage approaches one must not tilt one’s head back or the dog falls off! Strangely, with dog on head, I did manage to reach the high notes way easier than before. Bizarre but true! Consequently, I am now considering utilising said dog in concerts. In fact, maybe I could indeed use Poppy? Me and Poppy could together take Britain’s Got Talent by storm! ‘Bearded Tenor With Dog on Head’? I think we’re on to a winner!