﻿So, with summer but a distant memory we enter into the new season of Loughborough Male Voice Choir concerts. In recent weeks a select group of nameless individuals seemingly met in a darkened room at a venue unknown to discuss the core repertoire for this new season. An interesting collection of songs emerged  with some additions from the recent past such as Swansea Town and Bridge Over Troubled Water. Among those dropped from the repertoire is My Way. Thank heavens that depressing dirge is gone. Please don't be tempted to hurry it back eh?

However, a multitude of newish songs in our Autumn concert 'Autumn Glory' on Saturday 13th October was not really a possibility. Those members who had joined the choir since the turn of the millennium would regard Deus Salutis and Speed your Journey as 'new'. So, the amended repertoire means loads of new songs to learn and it would be way too early for a lot of us to get to grips with them in a mere month or so. Thus the programme for this concert at Trinity Methodist Church Centre was to feature the 2011 stuff with just 'Troubled Water' added.

For this concert we welcomed from Wales, the Merthyr Tydfil Ladies Choir with their accompanist Matthew Woodford and their Musical Director Ian Hopkins. Our last meeting with a Welsh choir was at last years LOROS concert at De Montfort Hall and that was a memorable experience. We were set to meet the choir mid afternoon for a short rehearsal of Gwahoddiad which we would be singing as a finale. Ian warmed us all up and we ran through the song with us chaps singing verse one and three in english and the ladies verse two in Welsh. For the closing Amens, Ian gave us the option of singing them in whichever language we wished!


Then it was back home to get ready and this time it was to be the traditional uniform with just the addition of a bow tie - in place of the tie, obviously. 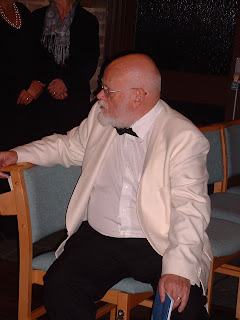 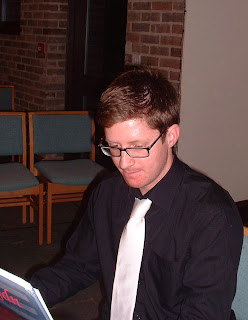 Back at Trinity by half past six and we were ready for the usual organised chaos of the logistics of getting on and off stage. It continues to amuse me as to how difficult it always is to sort this out, but sort it out we did and things went okay in the end with no serious injury incurred.

Okay, so come kick off time a splendid audience had assembled with Trinity pretty much full. I don't think we quite reached the point of turning people away as with the Stevenage Ladies gig last year, but it wasn't far off. We started proceedings with Stout Hearted Men, which was a change from the previous With a Voice of Singing. I can appreciate the need to change things, but 'm not sure  Stout Hearted Men quite does it for me as an opener. Anyway, it went well as did Vive l'amour, Bushes and Briars and He Ain't Heavy. I had all sorts of problems with 'Bushes' for weeks before but I just about got it together on the night! 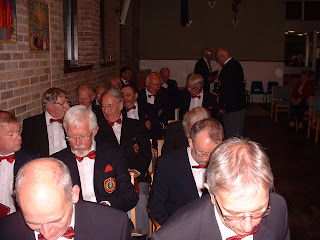 Loughborough Male Voice Choir, ready for the off with yours truly sitting second row on the right.


Next came sets from the evening's soloists. Firstly Matthew Woodford performed two piano pieces. As ever, I don't have details of the soloists pieces to hand (little opportunity to take notes on the night!) but there was no doubting the young man's talent. He was followed by our very own Lyndon Gardner, who performed two pieces by Francesco Paolo Tosti. Now this is not a composer I am familiar with, but I must say I was impressed with the songs Lyndon performed, particularly the second one, accompanied by a nervous Dave Weston on guitar. It worked really well, and both guys can be well proud of their performances. Bravo!

Then came the ladies! Ian introduced their selection of songs with typical Welsh wit. Firstly they performed a song that members of the Caroline Sharpe Singers would be familiar with, Rutter's I Will Sing with the Spirit. It goes without saying that they weren't as good as us, but it was quite good nonetheless. ;-) 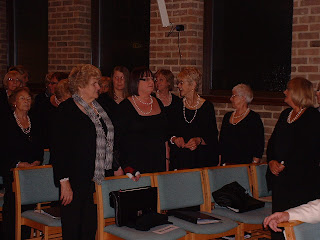 
Only joking! They then performed a couple of traditional South African songs Hama Lulu and Weeping, arranged by Alexander L'Estrange. These were excellent and not what one usually expects from a Welsh choir. The Ladies finished their opening set with Shenandoah and the very lively Boogie Woogie which was fun.

So that was an excellent first half, earning a well earned half time brew. Chris Hill emailed the choir on Sunday telling us to ask Chris Higgins about 'the story concerning the half time teas'. Hmmm! I'm intrigued!?! When I find out the details I will of course reveal all right here!

Part two started with LMVC returning to present When the Saints followed by Bridge Over Troubled Water. The latter is a fine song that I have always liked since Simon and Garfunkel first recorded it. The former however, is one I'd rather joined My Way, dumped in the archives! Then it was my turn to join Chris Higgins, Dave Weston and David Booth for the audience participation number, Pleasant and Delightful . Readers will no doubt recall that the last time we did this one I had a touch of memory loss and forgot my last line. Doh! No worries this time thankfully. I thought this was great and definitely the best we've done it. I was certainly at my most relaxed, which is a nice change.

To wrap up our set it was the job of Armadillo, sorry, Is this the way to Amarillo? to leave the audience with a smile on their faces. Well, with us lads holding music folders, it wasn't possible to do the hand claps, but as it happened, the audience were clapping right from the off. Great stuff!

Matthew then performed two more impressive piano solos followed by Lyndon performing three more songs by Tosti. No further details alas, but it was all impressive stuff. The Merthyr Tydfil Ladies then presented their second set comprising My Favourite Things from the Sound of Music; As Long As I Have Music; Love Changes Everything; A Cry in the Night and finally Lausanne. It was all really entertaining stuff and I was particularly impressed with several of the ladies who really performed the songs with loads of expression which was great. I know I need to try to do the same.

All that was left was for us to join the ladies on stage to sing Gwahoddiad. This was fantastic and the closing Amen brought a shiver down my spine. I hope it had the same effect on the audience. 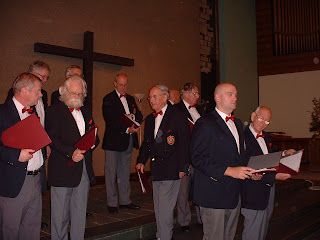 Loughborough Male Voice Choir rehearsing
So there you go, another splendid concert and recorded by David Concannon for release on CD soon! The only thing missing from an otherwise fabulous night was the noticeable lack of 'whoops' from the audience. Sadly, with my wife and her sisters away for the weekend, celebrating their brother's 50th birthday, there was no-one to step in and 'whoop'! Ladies we missed you!