It's Christmas, so sing, sing, SING!

Festive Greetings one and all!

Traditionally things start to get busy for most people as the festive season approaches. The household at Chateau Knightthorpe have experienced a quite frantic schedule over the last few weeks of singing lessons, rehearsals and concerts. With yours truly involved in the Loughborough Male Voice Choir and Caroline Sharpe Singers, both Anna and Amy in CSS and Enchanted and Ruth in CSS too, it's been a quite mad couple of weeks, but amazing fun!

Oh to have had the time to do a blog about each event straight after it happened, but you'll all just have to make do with a review of the lot, right here. So sit back with a glass of mulled wine and a mince pie as I take you back to Friday December 7th. . .

Okay first up was All Saint's Parish Church, for a concert as part of their Christmas Tree Festival. Us chaps presented a collection of festive goodies in the first half with a choir called Viva la Musica presenting the second half. I really enjoyed this concert in amongst a veritable forest of beautifully decorated Christmas trees. We sang well, as did Viva la Musica who were very impressive.
One interesting development as result of this concert was that in the audience was a young man who was so impressed he wanted to join us! During the interval he apparently asked Chris Hill "are young people allowed in this choir?" Absolutely no arm twisting was required and he was to take up the offer to join us at our next rehearsal. Despite presenting just half a concert it set us up nicely for the full concert the following night.

So, rather than half a gig, Saturday 8th was to be the 'Full Monty'. Okay, that's not a pleasant image to dwell on for too long, so let me re-phrase. I mean we would be presenting a full concert. Proudly displaying the W.H. Russell Shield, we started with the four songs entered at the triumphant Leicester Festival performances, and then following it with Christmas Carols after the interval. We also had the debut appearance of The Shanty Group masterminded by Ray Taylor and then a certain guest soloist called Caroline Sharpe. The latter was brilliant as usual and the Shanty Group surprised me a bit by being pretty good too. Only jesting chaps. Love the wooley pullies! Oh and Michael Dukes' Satnav poem was hilarious too.

Rather than run through all the carols we sang it these gigs, I'll just mention the new addition, A Wiltshire Carol called Rejoice the Promised Saviour's Come, which is similar to our folk song Pleasant & Delightful in that it includes some solo verses with a line at the end for all to repeat. Nice one Mr Hill and one to become a regular, annually at least.

The following night, I had the opportunity to be part of an audience for a change at a concert by the Belvoir Wassailers at Waltham on the Wolds, featuring kids from local schools and a couple of guest soloists including that Caroline Sharpe woman again. As brilliant as she is at putting choirs together, it's worth remembering that she can actually sing a bit. This was a very different Christmas concert - very laid back with everyone having fun. The arrangement of While Shepherds Watched to the tune of Ilkley Moor was fantastic and one for us to try I think. The only disappointment was that I won nothing in the raffle. No, not a thing!?!

This then left a week before the next engagement. But what to do with myself? Well, my time was filled with singing lessons and a few more rehearsals of course. Saturday 15th December promised to be a marathon of singing endurance. The programme was as follows:-


Mad? Err, yes probably, but hey, it's Christmas so let's go for it eh? Tesco was great - very relaxed and loads of fun. A nice audience assembled and enthusiastically joined in with the carols. 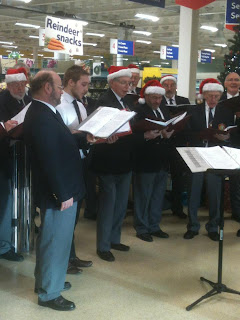 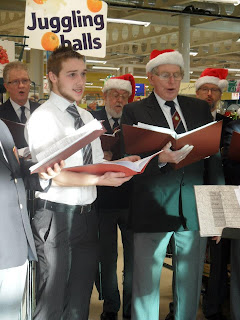 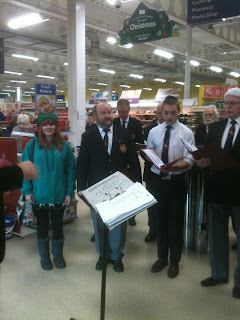 The choir joined by Enchanted's Anna-Ruth Gray at Tesco in The Rushes. 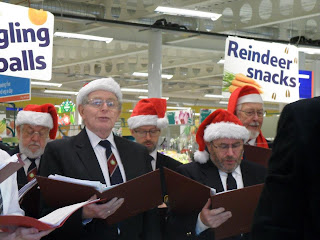 Jeff Buckley, Gerald Morling, me, Jim Lacey and John Holt at Tesco in The  Rushes.

After that enjoyable sing, we made the short trip over to Carillon Court for our usual stint outside W.H. Smith's.  I loved this last year and it was just as good
this time. There's something quite inspiring about singing to an audience that never expected to be part of such a thing when they left their homes that morning, apart from 'Rent-a-Crowd' that is! 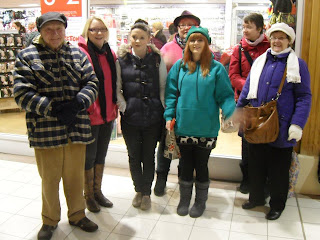 These intrepid souls follow me and LMVC  wherever they can. Your loyalty will be rewarded in heaven ladies and gents.
The singing again went down well and we finished with the 'honorary carol' and audience fave, 'Amarillo'. "What's this got to do with Christmas?" asked one choir member. Well, nothing, other than F.U.N. I guess.

Right, that was that for the LMVC, for a few hours at least. Time to go home for a breather before preparing for the evening's concert with the Caroline Sharpe Singers. No rest for the wicked? Barely having time to break wind, I was off to Woodhouse Eaves Baptist Church to prepare for the gig. Upon arrival, I felt absolutely knackered. Sorry, I mean rather fatigued? While Enchanted rehearsed I confess to having dozed off. Then all of a sudden, I was called upon to do my solo, Born in the Night. Eh? What? Me? Now? Oh, right.

Feeling half asleep and a tad unready, I spluttered  into the carol and almost forgot what I was singing. I'm surprised Bring Him Home didn't emanate for my mouth! Needless to say, I messed up verse two. What is it with second verses? So feeling somewhat brain-dead, I decided that later I would use my music and hopefully avoid any potential embarrassment. Good decision.

Cometh the hour, cometh the choir. And an audience. Not huge, but certainly an improvement on 'one man and his dog' that turned up to last years concert in Sileby, and a good percentage were not related in any way with any of the Sharpe family which i
was good.
Highlights of this concert I thought were Anna's solo of The Little Road to Bethlehem and her reading which brought a round of applause. Also Jonathon Brookes' rendition of What's This? He told me that he only learnt it properly that afternoon. Pah! Don't believe a word of it. That was way too good to have been slung together in an afternoon. Either that or you're a genius!

Like any good concert there's a cock-up or two. We won't dwell on them - just put them down to experience, but quite what happened to us chaps at the start of Good Christians All Rejoice,God only knows. Some of us were right, while some of us were singing in the wrong key. Horribly! But hey, we got it together eventually and finished well, I think.

Other highlights were Jingle Bells performed by Enchanted, which was brilliant and also Paul Widdowson's performance of White Christmas. When everyone joined in the last chorus, it almost brought a tear to the eye. Magic! That just left us to don Santa hats for the finale of We Wish You a Merry Christmas, before fleeing to Gail's house for post gig kari-jokey party.

Better not say too much about the party except I have a confession to make. Much punch and wine was consumed. Too much in my case and I'm afraid, I broke a wine glass. Oops. Sorry Gail, I confess my sins and will happily replace said wine glass. I hang my head in shame. Damn good party mind. Shame Bring Him Home was in Alfie Boe's key. Couldn't get anywhere near it sadly even after consuming a bucket of wine.
Much of the night was a blur and  I awoke surprisingly free of hangover but with a deep voice that would've given Chris Higgins a run for his money.

Oh Lord, at half past one the LMVC were singing at Sainsbury's. This in truth was a step too far for my vocal chords that seemed to have nowt left to give and I croked through the hour like a bullfrog. 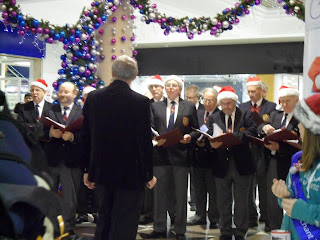 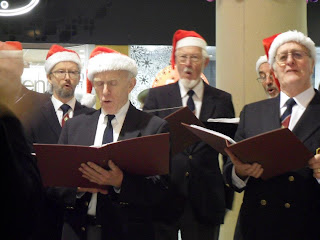 Second tenors and a bass. Me, Reg, John, Terry and Michael,
singing Carols at Carillon Court. 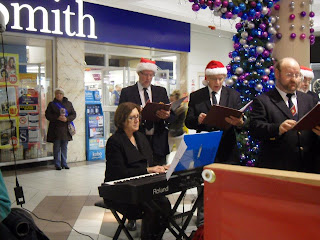 Or fabulous accompanist, Sue Ellerby playing for us at Carillon Court.

One amusing moment occurred early in our stint when a grumpy lady shopper on her phone started yelling to someone about not knowing which bouquet to buy and didn't seem to appreciate a bunch of chaps singing. This was our cue to crank up the volume and drown out her phone call. Lyndon's powerful tenor voice came into its own in splendid style. Ho, ho ho!?!

And that's about it. Another year's festive jollity over for another year. Except that is, for the now 'traditional' Carols at the Carillon on Christmas Eve at 1 o'clock. After last year's fantastic experience, you'd be mad to miss it.

If I don't see you there, may I take this opportunity to wish you all . . .