Apologies to all for the lack of posts since the Alfie Boe gig, but time has been at a premium since then. The new LMVC website has taken a bit of mental effort to finally get up and running but we're there now thank heavens. You can take a look by clicking here. Back in the early 2000's when I was a reflexologist, I produced a website, but as with everything technological, things are a lot different now and the learning curve to get up to speed has been huge. Already, I can see ways to improve the structure but it's not bad for a start.

So what's gone on in the last few weeks? Well firstly, Ruth finally got her exam result for her Grade 4 singing exam getting a MERIT with 81% including FULL MARKS for her sight singing, which puts me to shame. I got a merit too but failed my sight singing, so well done m'dear, splendid stuff!


Also, one thing that needed rectifying was the fact that Ruth missed the Alfie gig in NIA Birmingham a few weeks ago through illness and was gutted. I therefore hoped to book a couple of tickets for another concert ideally as soon as possible, but rather expected to have to wait a long, long time. It came as a bit of a surprise then to find that via Ticketmaster it was possible to get two tickets for Sheffield Motorpoint Arena on Friday 5th April! Not the greatest seats in the place it must be said, but at least we'd be there. So I snapped them up and off we went. With Googled directions in hand we got to the venue in good time and made our way up towards the 'Gods'. As we started the climb up the steps, an official Arena staff person attracted our attention, saying "excuse me, are you going up to the upper tier?


Well, yes we were as that's where our seats were. "Would you be interested in seats on the ground floor, at the front in the centre on Row 9"? I think both Ruth and I were wondering what the catch was, or whether it was some sort of joke. Well, it was no joke, there was no catch and there we sat - dead centre within spitting distance of the great man. Bloomin' fantastic!
I won't go through the entire concert again, suffice to say, he was even better than the Brum gig. Now well into the tour, he was clearly more relaxed and communicative with his audience. There were a couple of changes to the set but it was pretty much the same, again concentrating on his new CD 'Storyteller'. I think he's finished his UK tour now, so you will have to wait a while for another chance to see this brilliant performer in action. 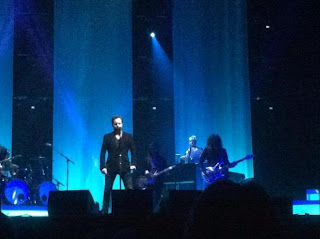 Now, I guess you are still wondering what the title of this post is referring to. Well, I came to mind during a recent male voice choir rehearsal when near the end, I realised that I had hardly sung a complete word all night - a slight exaggeration but not by much! You see, the good thing about being a second tenor is that you don't have to sing quite as high as the first tenors. On the downside, many parts are cursed with lots of doo-doo's, dah-dahs, oooh-ooohs, and lah-lahs. One of the first songs I was confronted with after joining was Abba's Thank You for the Music which starts with what I refer to as 'the dreaded doo-doos'. Anyway, on Thursday 18th April we were practising  two new songs, The Way We Were and the Paul Blakemore arranged Moon River.  Both of these, particularly the latter, is riddled with doos and oohs to an alarming degree, but at least with Moon River they are liberally sprinkled between all four parts. So by a quarter to nine I was almost desperate to sing Amarillo. I said almost!

Meanwhile, the musical genius that is Caroline Sharpe has been working with another group of ladies on Tuesday nights in Woodhouse Eaves. These ladies meet up and sing simply for the fun of it. No pressure to sing solos, they just turn up and have some fun. Saturday 27th saw the group of gals make their performing debut as the after dinner entertainment for the Come Dine with Me event at Trinity Methodist Church Centre in Loughborough. Also on the bill were solos from Gail Morgan, Amy Sharpe and no less than four songs from CSS's Paul Widdowson. Yours truly made a modest contribution to the proceedings forming one third of a trio together with Michelle Oldale and Ruth.

What a great little concert it was. So good in fact that Caroline was approached to do another concert for somewhere local in the near future. So well done everyone!

That just about wraps it up for now. I'll be back soon with the build up to Caroline Sharpe Singers' Coalville festival debut in May. 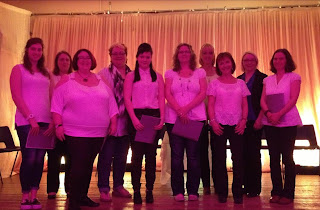 The girls of 'Music in Me', at Trinity Methodist Church Centre,
Saturday 27th April 2013