Possibly the best birthday ever!

We are now in the midst of the peak singing season for both Caroline Sharpe Singers and the Loughborough Male Voice Choir. Last weekend was Coalville Festival and this Saturday it's LMVC's spring concert at Trinity Methodist Church. With my 53rd birthday (no, I really am 53!) falling on this day, celebrations would have to wait.

Well actually, they took place on the Friday night because I found out that I had been offered a job late on Friday afternoon. Such was the relief, wine was consumed to excess resulting in thumping headache upon awakening on Saturday morning. Nothing a couple of paracetamols couldn't sort out though, so on with the show!

First on the birthday agenda was a rehearsal with Caroline Sharpe Singers at Trinity. By now via the wonder that is Facebook, just about everyone knew it was my birthday. Well, I presume Gilly Higgins knew it was my birthday as she gave me a kiss on the cheek! Prior to kicking off the rehearsal, I was given a highly tuneful rendition of 'Happy Birthday' which was nice. Ta very much people! Right after the rehearsal we tucked into Al's Birthday 'Rocky Road' a scrumptious creation made up of chocolate, biscuit, chocolate, marshmallow and chocolate, and topped with err, chocolate. Mmmm, nice! Much thanks to Ruth for this gastronomic delight!

Okay, next we had a short break before a short drive to Wymeswold to sing in another wedding. Now I'm not the biggest fan of church weddings but this one was even more forgettable than most. I mean, honestly, All Things Bright and Beautiful for a wedding? Oh dear!

Let's move swiftly on to the day's main event, The LMVC spring concert 'Sounds of Spring' with our special guests, The Enderby Band. We had met these gals and guys last summer at the outdoor concert in the sunshine at Beaumanor Hall and we were all very impressed with them then. With black shoes polished and gleaming white shirt ironed I arrived at the church to find Lyndon Gardner near the point of spontaneous combustion. It seemed getting about thirty men to sit where he wanted was proving beyond him, while he seemed reluctant to admit that three rows was never going to work. Chris Hill eventually had his way and two rows was the result. That seemed painfully obvious to me but hey, what do I know.

The Enderby Band assembled, complete with a very impressive percussion section. Just listening to them warm up was awesome. We joined them for a quick run through Rule Britannia and I stood directly behind the two E-flat basses, which brought back happy memories of my school brass band days, when I played that massive instrument. The band's musical director Jonathon Mott was a lively chap who has a wonderfully confident conducting style and something of a sense of humour too. Anyway, that was that until kick off.

Now after the choir's warm-up which included another rendition of 'Happy Birthday', (thanks chaps!) we rather oddly dispensed with the orderly procession to our seats in favour of a somewhat disorganised amble to our positions. This was to be honest, a bit of a mess and shouldn't be repeated. Instead of the audience clapping us to our seats they sat there waiting and wondering what the heck was happening. After what seemed like an eternity, Chris got things going with Stout Hearted Men, before Gerry did his humourous introductions. Gerry seems to be growing into the compere role in the absence of George and has got together some great one liners! We then followed that up with He Ain't Heavy and Speed your Journey. The latter has become a firm favourite of mine. I just love the changes in dynamics. 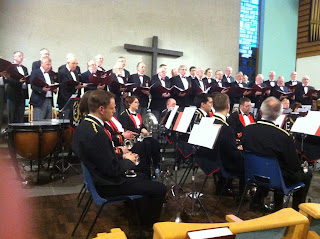 A new piece followed that  which was a quartet arranged by our own Paul Blakemore, called Summer Scenes and included the voices of Paul himself, Gerry, Lyndon and Chris Hill. Yes folks, our MD can indeed actually sing! If ever the man wants to hang up his invisible baton there's a place awaiting alongside us second tenors! It was an interesting piece that needs a second listen. I'm sure we'll hear some more in the near future. Next Sunday perhaps?

Michael Dukes then took to the piano as part of the now legendary partnership with Gerry Brennan. Now I can't for the life of me remember what they did in the first half. It was funny tho and when I remember I will amend this blog. Bear with me chaps! 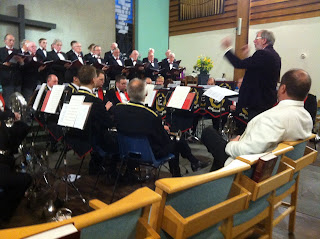 After another set from the choir including The Way We Were, Lyndon Gardner followed with a couple of I think Tosti arias. Then Gerry introduced our guests the Enderby Band for their first set. Oh boy! Where the heck do I start? I've been trying to select the most appropriate superlatives to describe this band: Sensational; inspirational; awesome; spine-tingling etc, etc. I think the band is probably best described as simply A CLASS ACT.

I have a bit of a background in Brass Band music, having played initially the Tenor Horn and latterly the E Flat Bass for my school's brass band. Having been to concerts by the Eagly Mills Band and the Black Dyke Mills Band in my youth, I think I know a good Brass Band when I hear one and Enderby Band are very, very good! It's a very long time since I've heard such a quality of sound. The purity of tone was simply magical and sent a shiver down the spine. Their second piece, Concert Etude featured a breathtaking solo from Nick Smith. What was obvious from the outset was that all members of this band are very talented musicians.

The end of their set saw us through to the interval and a chance to draw breath and for Gilly Higgins to thrust promo flyers into the hands of eager punters to encourage an audience in the park next Sunday. Well done Gilly, you will be rewarded in heaven.

The second half began with the choir and the ever popular Amarillo, Simon & Garfunkel's Bridge Over Troubled Water and the welcome return of Let It Be Me. This then signalled a quick costume change for the Shanty Group, introduced by Terry Jones a.k.a. Captain Jack Sparrow! One song featured solos from several of the guys. Well done Terry Jones, Jim Hannam, Jim Lacey; Chris Higgins, Mike Godwin and young Peter Herbert. Bravo! 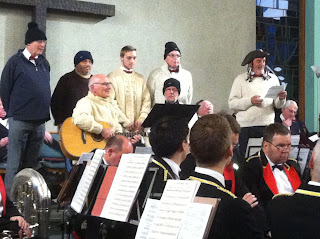 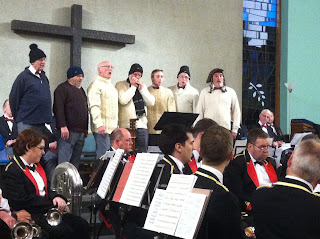 Next we had two pieces from West Side Story - Maria sung by Lyndon Gardner followed by Tonight by the choir and this was followed by another couple of songs from Mike and Gerry - the hilarious piece of political satire Hole in My Budget and finishing off with Slow Train.

Next up was the one we in the choir feared the most, the new Paul Blakemore arranged Moon River. This has proved something of a challenge from Day One. Hear the melody  is split between each part interspersed with lots of 'oohs' and 'doos'. Not easy but we were assured by Paul and Chris that we were doing okay and it would sound fine if only we sing it with a bit more confidence. Not easy when you're not feeling at all confident in what you're singing. When I'm singing my part it sounds a complete mess, but it's one of those pieces that needs to be heard in the audience to fully appreciate what's going on. I think I'll try that next time we sing it in rehearsal. Anyway, feedback suggests it sounded really good!

Okay, time for the Enderby Band again. What's this? Fat Bottomed Girls? Hmm! How was this, the Queen classic, going to sound from a brass band? Absolutely brilliant is the answer. It took all my will power to remain in my seat and not jump up and strut around the stage like Freddie Mercury. I made do with just singing "fat bottomed girls will be riding today" etc, etc. I wanted to scream "Get on your bikes and ride" at the appropriate time, but thankfully didn't. Then they performed Spanish Dance followed by the Tijuana classic A Taste of Honey and rounded things off with a Oklahoma medley.
Stupendous, awe-inspiring and all the other superlatives used above. I can't remember enjoying a concert as much as this and it was an honour and a privilege to share the evening with such a classy set of musicians as this. I had a brief chat with their bass trombone player Tom Chinnery who said they do quite a few concerts and to keep my eye on their website for details. I also mentioned my E flat Bass playing past and he said "you can always start again"! They have a training band apparently. Very tempting if I wasn't already in two choirs and about to restart OU study. I'll definitely get to one of their concerts though and soon.

All that remained was for the band and choir to join together to round off the evening with Land of Hope and Glory and Rule Britannia with the audience singing along. What a fantastic concert! I loved it and maybe we should think about more joint concerts with talented bands such as this.

I've got to personally thank all the Enderby Band for reawakening my love of brass band music and making it a birthday to remember for me. Cheers!

Well that's all folks until Sunday, 2pm in Queen's Park Bandstand for another sing-song in the sunshine! Fingers crossed and see you there.