Time to catch up.

This working for a living really does have its drawbacks. Okay, it pays the bills (almost) but it does get in the way of the interesting stuff.

Like keeping this l'il ol' blog up to date. What have I been up to over the last month? Well another splendid Caroline Sharpe Singers concert for a start. Back on Saturday 6th July we presented a great concert at St Mary's Church, Sileby. The choir made its performing debut in Sileby to an embarrassingly tiny audience before Christmas 2011, so fingers were crossed that this time a larger proportion of the population of Sileby would turn up this time. No worries mate - we did indeed have a creditable audience. Sighs of relief!

The concert featured six songs by the choir plus twelve from the new look Enchanted. Additionally there were two sets from our special gust soloist for the evening, Alan Speight. While Alan was new to me he is actually very well known in these parts and has a wonderful baritone voice.

Highlights of the evening for me were definitely Alan Speight's solo spots, in particular his rendition of Linden Lea. Oh how that little song brought back memories for me! Alan's singing was quite beautiful and he is now another singer to add to my list of voices to aspire to. Great stuff and I think it won't be the last time that he is asked to be a guest of Caroline Sharpe Singers. It was funny to hear him say at the interval how he struggles to remember words these days. It gets worse with age apparently, so there's no hope for me then.

Enchanted were excellent again and appear to have suffered no ill-effects of the recent personnel changes. If anything, the sound is more balanced than previously or is that just the beneficial effects of my lovely new hearing aids? However, the biggest highlight, for all the wrong reasons was The Rose, sung heroically by the girls, but featuring a solo bit by Rose Lucas at the beginning and end. Heroically? Well yes, because of a certain embarrassing but unintentional blunder by the oblivious Chris Hill. You see, prior to The Rose, Alan Speight had completed his first set of songs. Chris had adjusted the key of his final piece on the piano from that of the music he had, to a key more suitable one for Alan. Obviously the piano would need to be re-set back to normal afterwards and it was. Well was supposed to have been...
Sadly I was sat behind the girls with the choir, so missed out on the look of sheer blind panic in the eyes of the girls, Livvy particularly, as they realised something was horribly wrong. The Rose commenced, way, WAY too low. To be frank, Bryn Terfel would've struggled to sing this low, but somehow the girls heroically gave a splendid if somewhat butch rendition of this lovely song. If you ever fancy joining the LMVC's baritone section Rose, you'd be very welcome. Ho-ho!

Chris Hill meanwhile blundered on regardless, blissfully unaware of any problem. Live music eh? Don't ya just love it?

The other highlight on the night was Masquerade from Phantom of the Opera. The sight of Jeff Buckley in his mask (see photos below) is something not to be missed. In truth this piece was far from perfect and moves are afoot to get us singing it without copies in future. Let's face it, everything is so much better without copies as the male voice choir has found lately.

We rounded off the evening with the dramatic I Believe which I thought was grrrr-eat! It needs to be the last piece, simply because it takes so much lung power to deliver that I'm good for absolutely nowt after it! A cracking night was had by all I think.

I will leave you with some superb photographs ruthlessly stolen from the Caroline Sharpe Singers Facebook page. Posted by Kate Pemberton, so presumably taken by her 'other half? Nice work mate!

Will return soon with news of exciting developments for both the LMVC and CSS who both have up-coming 'away fixtures'. Exciting stuff! 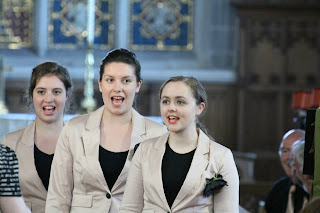 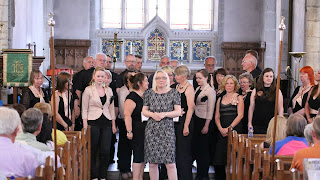 Caroline introduces The Caroline Sharpe Singers as only she can. 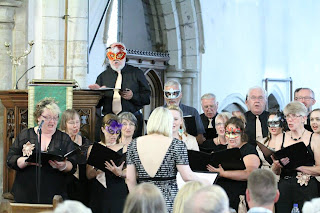 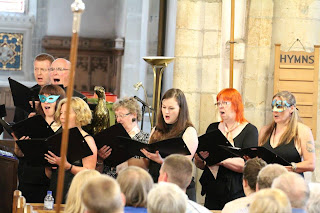 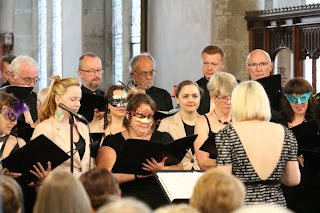 A typical Caroline Sharpe Singers photo with Chris Higgins, Anna-Ruth and Livvy Thornber
the only ones looking at the musical director! 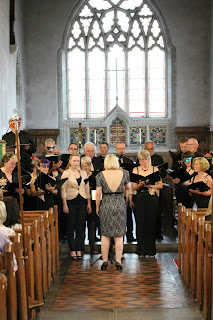 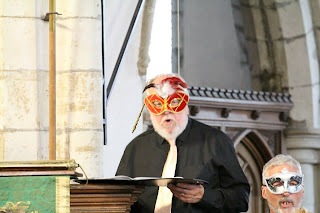 The Lone Ranger and Tonto?
No, it's Jeff Buckley and Terry Jones performing Masquerade. 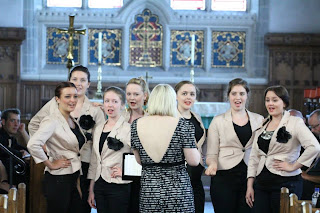