Oh what a night!

Oh my word. How do I start? After spending the morning wandering around the house with an inane grin on my face trying to think about something other than last night, I've given up trying and instead I think I'd better put all my thoughts on this blog and get it all out of my system.
Last nights concert was simply a personal triumph. I wouldn't say for one minute that I sang superbly well, but it was never about that for me. Last night was all about conquering some personal demons and, believe me, they were queueing up in my subconscious to give me their opinions in the early evening.  "Don't do this! You'll make a fool of yourself. It will be a disaster, you know it will" they said. But before the destructive, irrational thoughts took control, my wife Ruth got out the massage oil and applied her healing hands to the neck, shoulders and back and magically eased away the stress. Such was the effect of a few minutes relaxation, I think this could well become a regular routine before future concerts - should my services still be required, of course. I wouldn't want to take anything for granted!
After that it was on with the uniform complete with gleaming  new choir badge applied to the Ted Baker jacket. Ruth thought this momentous occasion had to be recorded with a photo or two:- 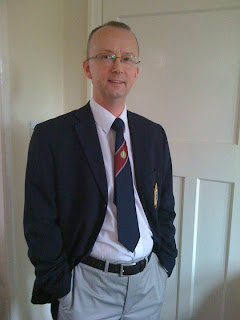 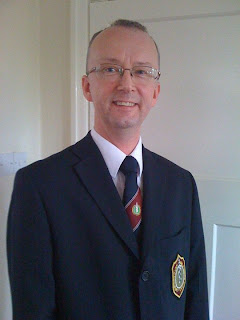 Smiling, a little nervously, but smiling!

So, with the photo shoot over, it was time to get on with it and drive to Trinity. Nerves were under control and I felt surprisingly calm on arrival despite the realisation that this was it. Game on! Several of the lads, realising this was my debut, asked me how I was feeling which was nice. Chris Hill offered me a further option for my 'first song dilemma'. Option 4 was to sit out the opener in George's compere's seat  and take my place with the choir for the second song while George announced the three songs we were to sing. This was the perfect solution and made me feel much more at ease. That said, when we walked in to the hall, I did feel rather like the condemned man being escorted out to the firing squad! All those people!?! While sitting in George's seat, my heart started pounding at an alarming rate and it was something of a relief when 'With a Voice of Singing' was over and I could join the rest of the choir.
With heart still thrashing away, 'Eriskay Love Lilt' began and I got through it in something of a blur. Nerves prevented me from producing much in the way of volume, but with no real slip-ups, it gave me a bit of confidence. I confess, I spent the moments before the next song trying to locate my family who I finally found disappointingly near the back of the audience!  Next up was 'Chanson d'amour' which went much better, despite some pretty inept finger clicks on my part. Strangely, I'm much better at finger clicking with my right hand than left which is odd, as I am left handed. I also tried my best to make my 'Ra-da-da-da-das' as 'breathy and sexy' as I could but I will leave it to others to judge how successful I was!
Our first half set came to a close with 'Vive L'Amour'. Now I really enjoy singing this one but somewhere, quite early in the piece, I completely lost my place and never got it back. However, rather than it being a disaster, I just carried on and sang what I could remember, which surprisingly was most of it. So that in itself gave me a massive confidence boost for the second half. Off we went, leaving Paul, Lyndon, Gerry and Chris Higgins to sing the mixed quartet followed by Lyndon's impressive operatic solos.
The rest of us chaps then returned to watch the Stevenage Ladies do their stuff. I particularly liked 'The Lord is My Shepherd' being a big fan of The Vicar of Dibley. I also think us chaps should have a bash at 'Allelujah'. Learning a song with only the one word rather appeals. Mind you, there were quite a few disconcerting twiddly bits in the middle of it that might prove a bit tricky!
So that was part one wrapped up and off we went for a well earned brew and 'hob-nob'. During the half-time break poor Chris tried to explain the logistics of getting us and the ladies in and out of the hall during the second half, but such was the buzz of the choir at the time I don't think anyone really took in what was being said. Anyway, we managed it somehow and the three songs, 'Give Me That Old Time Religion'; 'Let it Be Me' and 'Thankyou for the Music' went really well. I felt quite relaxed for these three and started to really enjoy myself. 'Let it Be Me' is by far my favourite piece so far - a really beautiful song and I look forward to getting my copy of the CD to see whether it was as good as I thought it was. The last song was a laugh if only because of the diction problems that I described in a previous post!
Then after the ladies went through their set of songs, finishing with a rousing version of Queen's 'Bohemian Rhapsody', it was back on stage to join them for 'You Raise Me Up' and 'Softly as I Leave You'. Both of these seemed to work really well despite only one run through together. And finally, an encore of 'You'll Never walk Alone' brought this amazing evening to a close.
As we drifted towards the exit, several choir members again asked me how I felt and the look on my face probably said it all. I felt like a million dollars and simply can't wait for the next one. If you had suggested to me just a few short months ago that I would soon be singing in a choir, I would've thought you crazy! But now, singing in Queens Park on 29th May can't come quickly enough!