Would you believe it? Solo number two is done and dusted, to end a quite manic but fun filled weekend consisting of Caroline Sharpe Singers rehearsal, Wedding in Wymeswold, Enchanted concert in Barrow, Loughborough Male Voice Choir singing in Sainsburys and a Caroline Sharpe Singers concert in Sileby which included the aforementioned solo spot.
Okay, first on the weekend agenda was the 10 o'clock rehearsal of CSS at Trinity Methodist Church. This all went very well and as it was Caroline's 23rd birthday (?), a beautifully sung 'Happy Birthday' was in order. So the run through went pretty well until Caroline decided to spring the solo run through on me. Now I should've anticipated this really, but the sudden shock sent me into panic mode (again). As I sang Born in the Night (Mary's Child) it seemed to me to  be in completely the wrong key! Common sense would suggest that the venerable Mr Hill would be absolutely right and indeed he was. It was all a figment of my over anxious imagination. Not to worry, I remained confident that it would be alright on the night, despite again being extremely nervous of singing in front of this small group of people. I now have a theory as to why this is - more on that later!
From there we trundled off in convoy to Wymeswold for choir duties at another wedding. This turned out to be a much more upbeat ceremony than previous ones and I thought we sang rather well.
Being Caroline's birthday, it was all round to her place after that for nibbles and cake - plenty of cake - A 'Julia' cake﻿ created to her 'secret recipe' and a 'Herman' cake!?! Don't ask - there's insufficient space within this blog to explain. . . Herman was very nice anyway. Prior to leaving Caroline's for the evening concert, we all had a sing-song of carols old and new around the piano, which was a right larf!
Okay, off we now go up the road, a mere stone's throw, to Barrow for the evening's Enchanted concert. This was a slightly shorter version of the previous concert, with readings but minus some of the Messiah songs. This was another excellent concert by the girls. They were going to have to do something miraculous to better the last effort and they weren't far off. Bravo! I spent the gig videoing all the songs for possible upload to Youtube. If we do this I'll let you all know.

So back home for a wind-down with a nice bottle of 'red' before a good night's sleep. Readers will no doubt remember that prior to my debut solo a mere 3 weeks ago, I had a bit of a confidence crisis. No such repeat this time I'm happy to report as I slept like a log without the need to symbolically back out of the impending solo.

So Sunday came along and off we went to Sainsbury's in the pouring rain! No matter, we were under cover in the foyer and as I arrived, the Salvation Army band were finishing off their stint. Rather than waffle on about it all, I'll let the photos tell the story of a fun hours carol singing . . . 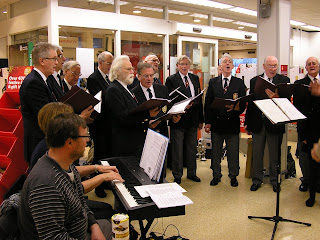 The Loughborough Male Voice Choir in fine voice at Sainsburys. 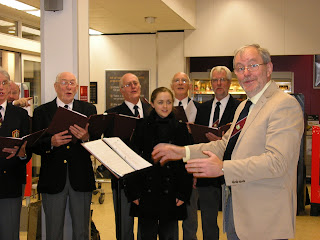 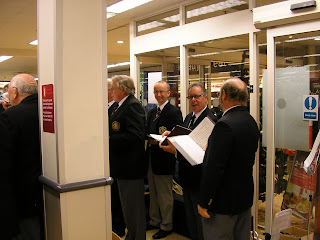 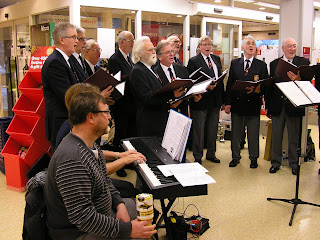 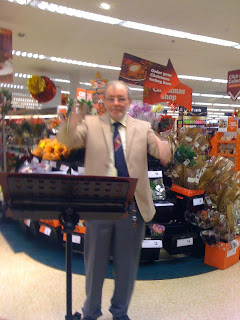 A 'choir's-eye view of conductor Chris Hill in action.
Photo taken by guest singer for 'Hark the Herald' , my wife Ruth! 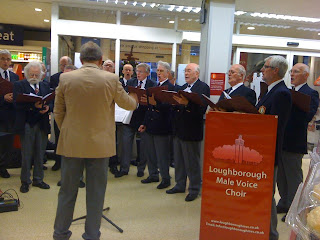 The Loughborough Male Voice Choir at Sainsburys!
You can just about spot me in the middle in full voice - no, I really am!
Well, that was fun!  Very relaxed and informal, with some unscheduled 'guest appearances' from my wife Ruth, and my step-daughter Anna-Ruth & Olivia Thornber from Enchanted. And the passing shoppers seemed to enjoy it all.
Well, no time to stand around chatting - it was then into the car and off to Sileby Methodist Church for the 4pm start of a Caroline Sharpe Singers and Enchanted concert with the latter reduced on this occasion to just four of the girls: Anna-Ruth, Alice, Maisie and Olivia. This concert was to be along similar lines to the previous Enchanted Christmas concerts but with the addition of some CSS songs and a couple of soloists - Maisie Ramsey and a certain promising newcomer (?) Alyn Coward - that's me in other words. As I arrived at the church it was off with the LMVC blazer and tie and on with the CSS jacket and tie! I can't say that I gave too much to the warm-up as I felt well and truly warmed up at Sainsbugs! Anyway, 4pm was upon me before I knew it and felt a tad flustered as I took my place on the front row.
Now unfortunately, the audience was disappointingly small, due I have no doubt to the horrible weather. No matter, few they may have been but those intrepid few still deserve a good show and it started well with the opener, Sing With the Spirit. Now, I found it very interesting that I started to be increasingly nervous as my solo approached and I think a combination of the small audience and small venue had a lot to do with it. Last month at Trinity, the hall is so large and the audience too, that I was somehow able to block them out. Here however, I was uncomfortably aware of each person just a few feet away. Gulp!
Born in the Night (Mary's Child) started quite well though I was aware of a slight quivering of my voice, but kept at it. Again, comments afterwards emphasised to me that this is not apparent in my singing voice. Clearly, what I hear is not quite what the audience hears, which is a relief in many ways. I've now had too many positive comments for them ALL to be telling 'porkies'! For this song, I had the benefit of four of the gals singing some harmonising 'arhhs' with me on stage. They were: Ruth, Amy Carter, Olivia and Alice. Thanks ladies! The only negatives were that I again felt the need to have my comfort blanket with me - the words. While last time, i didn't need it, this time I probably did if only to ensure that I got the right words in the right verse. And, I ended with another puffing out of the cheeks and sigh of relief rather than a smile and a proper bow!  The goal now is to learn to 'perform' a song rather than just sing it! All in good time eh?
Enough about me! Maisie's solo was excellent, as were the readings from each of the girls. The Caroline Sharpe singers were great too, despite one or two gaffes from me - like completely missing the start of my tenor part in verse 2 of Unto Us is Born a Son. As I was the only one singing tenor, this left a gaping hole! Doh, what an eejit! This was recovered somewhat by us chaps being wonderfully 'menacing' in the 'Herod baby slaying' verse 3! Then, after singing Good Christians All Rejoice absolutely perfectly in rehearsal, I made a complete pigs-ear of it in the concert. Bar 48 was the culprit and I'm kicking myself, but hey-ho, such is life. It's all a learning experience as they say.
As for Enchanted, the girls were excellent again, coping admirably with there being just the four of them. Silent Night and The Holly and the Ivy were particularly good I thought. The closing piece, We Wish You a Merry Christmas seemed to go down really well with the modest audience and finished the concert very nicely and brought to an end another extraordinary day. It is certainly a pretty surreal experience standing there on a stage preparing to sing on my own and I can hardly believe I'm actually doing it.
Anyway, I'll leave you with a couple of photographs taken after the concert:- 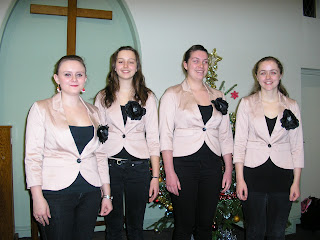 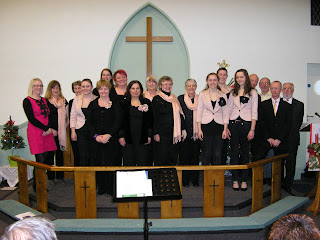 Post concert photo -  L-R:- Caroline; Vicky; Shirley; Anna-Ruth; Maggie; Amy; Ruth; Wendy;
Honor; Diane; Sylvia; Olivia; Alice; Maisie; Ian; Chris; ME and Jeff.
See y'all at Carillon Court next Saturday at 11am and then the Queen's Park Bandstand on Christmas Eve for more Christmas carols, accompanied during the latter by the carillon!
Cheers,
Alyn
Posted by Alyn at 23:37