To the Baptist Church, Carillon Court and a trip to Milton Keynes?

Take those chocolates away please! No really. I think it may only take one more 'Celebration', pistaccio nut or chocolate Brazil to tip the delicate balance of my guts over the edge and towards digestive armageddon! Mince Pie anyone? Brrrrp!?!
So, time for a Boxing Day detox, an evening chill and a blog catch up. Now where was I up to? Oh yes, a concert. Okay, so it wasn't Milton Keynes, but it certainly looked like it. The town in question was East Goscote, a 1970's planning catastrophe where the only things missing are some concrete cows! Very odd place, but I shall return to that later.
Firstly, another insanely busy weekend began with a short stint for the Loughborough Male Voice Choir at the Baptist Church commencing at ten o'clock on Saturday 17th. We were to be the first on and thus rather lacked an audience at the start with just seven or so intrepid souls present. However, numbers had swelled to around twenty-five by the close of our 15-20 minutes. How did it go? Well, let's just say we were a bit rusty! I barely got going in truth - even Sue threw in a few dodgy notes during the intro to one carol, much to her embarrassment. But, no worries, we did, like the church, warm up and get into the flow of it all eventually. We got it together by the end and then made the short walk across town to Carillon Court for our stint there at 11 o'clock.
We assembled in good time to follow the Salvation Army Band who were just finishing off. As we sang, a good number of curious shoppers took a break from their last minute search for bargains to listen to us as we went through our repertoire. I had my usual fan club in attendance with Ruth, Caroline, Julia and the in-laws present with Ruth and Caroline handing out promo leaflets for the choir! Well done ladies. You will be rewarded in heaven! 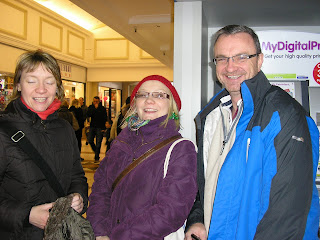 Part of my fan club: L-R Julia, Caroline and Martin 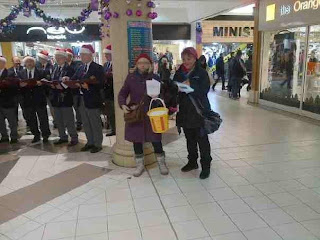 Heroes! Caroline and Ruth, collecting for LOROS and handing out LMVC
recruitment leaflets to potential male passers-by!
By that I mean potential choir members not potential males - obviously!?! 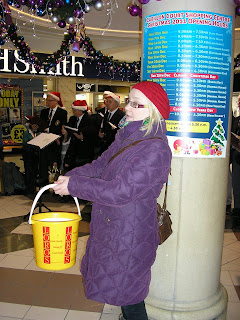 Caroline with LOROS collecting bucket.
The singing was relaxed and fun despite the hustle and bustle of christmas shopping all around us. Quite a few stopped for most of the carols with lots actually joining in to sing which was great! Apparently, quite a few gentlemen expressed an interest in the male voice choir and hopefully it is being seen in this sort of setting and being seen to be having a lot of fun that will persuade a few to come along to a rehearsal on a Thursday evening! 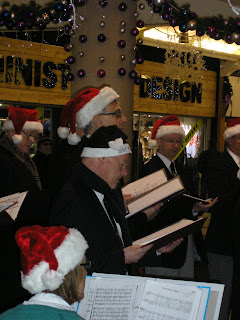 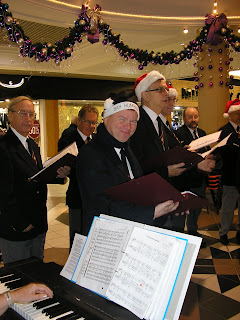 A smiling Paul Blakemore in that 'Bah Humbug' hat! 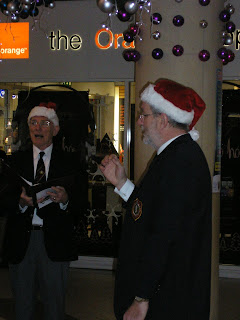 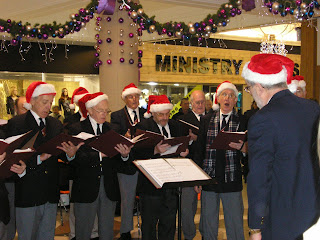 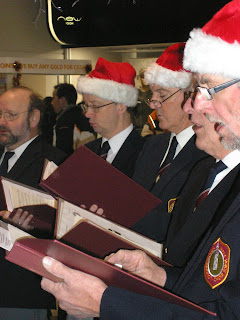 Assorted tenors' with me second from left. 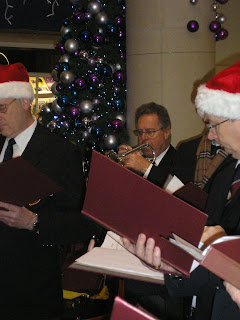 Gwynne gives what was to be his final cornet solo during The Oxen before he leaves the choir.
Cheers and thanks Gwynne. You will be missed! 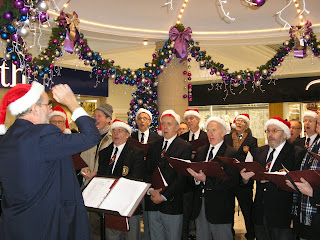 LMVC in full voice. Great fun was had by choir and shoppers alike.
After all that it was my turn to play audience for a change. On Saturday evening, Ruth and I went along to a strange place called East Goscote, a 1970ish new town built on the site of a former army supply depot. As mentioned earlier, it reminded me a bit of Milton Keynes - lots of concrete and row after row of characterless buildings. Even the 'church' which was to be the venue for the evening's concert looked more like a school hall rather than a church.  The concert was to prove an odd mix of festive music from the Cossington Singers, a flutist and the singing of Caroline Sharpe. The flutist was excellent but the choice of music was rather tenuously linked to the festive period. The Cossington singers presented some good Christmas songs, but should have perhaps left out the Pam Ayres 'comedy spot' which didn't quite work for me. Caroline Sharpe was without doubt (and without a hint of bias at all) a class apart. I've said it before and I'll say it again - this woman ought to be a worldwide superstar if there's any justice in this world. Her rendition of O Holy Night was truly stunning - the sort of performance that makes the hairs on the back of your neck stand up. Absolutely brilliant! 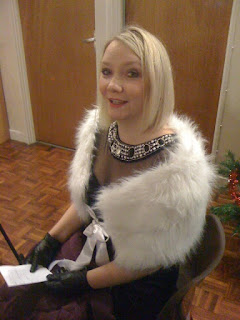 Caroline before her concert in East Goscote with the Cossington Singers
So with that, we then attempted to find our way home, but like my last trip to Milton Keynes, only succeeded in going round in circles. With the deja vu feeling beginning to take hold we finally resorted to the SatNav to get us out of the place! Scary!?!
So was that it for Christmas festivities 2011? Not a bit of it! Next up was an ambitious, (some may say downright foolhardy) attempt to have the traditional Loughborough Christmas Carillon Recital accompanied by a choir. Mad? Doomed to inevitable catastrophe? Maybe, but we the intrepid choir (whoever we turned out to be) were to be conducted by the safe hands of Chris Hill the renowned musical director of LMVC and accompanist to Enchanted. How did it turn out? Did we have an audience? Did we even have a choir? Come back in a day or two for all the gory details which will (technology permitting), include video footage of the momentous event. Not to be missed - trust me!
Cheers!
Alyn.
P.S. Turkey sandwich anyone?
Posted by Alyn at 19:31