Well, what do I know? Clearly not much it would seem. After explaining to you all where I had gone wrong in my quest for something better than a mere 'pass' it was something of a surprise to find I had passed with MERIT!

Hoorah! To say I am chuffed to bits seems barely adequate. It's not just the result, but the comments on the feedback sheet that are so rewarding.
I'll give you a run through of the main points:-
1) For my first song Like to a Linden Tree, the examiner noted my anxiety "which spoiled the tranquil mood" but also said that it was "a secure account and words came across creditably". So not too bad and he gave me 25/30.
2) Where e're You Walk: here he noted my dodgy breathing saying "the occasional top-up breath was taken, slightly breaking up the words". True enough. On the positive side he said " there was sincerity of emotion and words were used delicately" but "needed a little more warmth and inner calm".
25/30.
3) On the Street Where You Live: on the plus side I "concentrated hard and sang competently" but "without much vision " and said "it was all a bit earnest and measured". And he was absolutely right in also saying "it just needed a bit more carefree happiness - and a few longer breaths". 24/30.
4) Now the best bit! Pleasant and Delightful, the unaccompanied folk song. "There was good character and your timbre and style really suited this sort of song. There was a little huskiness but this actually added to the mood. It was varied and nearly all well in tune". And in the additional comments section he added "I shall remember your folk song - it was so very well in character". Good eh?
That just left the sight reading and aural tests. With masterful understatement, of the sight reading he wrote "this proved challenging" and "could not achieve independence of rhythm or pitch". 12/21 (fail!)
Thankfully the aural tests were marginally better but only "good enough overall nonetheless". 14/18.

Thankfully the examiner was looking beyond the nerves and saw the good stuff lurking beneath and the whole thing gives me a welcome confidence boost.
Now the Coward household awaits the result of Ruth's Grade 4 - coming soon!

Now I wonder if a few more LMVC members fancy having a go at an exam or two? Come on guys, you might just surprise yourselves!

See you next time,
Alyn. 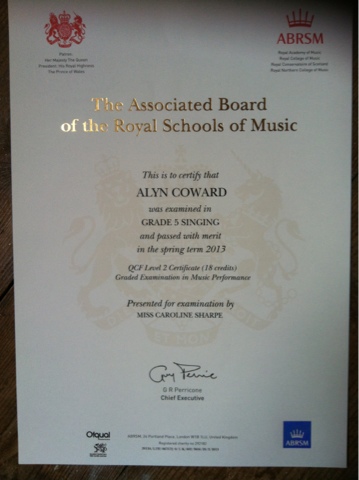