Recent events within our household just serve to underline some fundamental problems within the education system in our fair country. I won't go into too many details as it's not what you come here to read, but suffice to say the emphasis is all wrong. Forcing kids to learn stuff that is of no interest doesn't work. Presenting subjects that might be of interest but in a dull, uninspiring way kills off what interest there ever was. When will the penny drop that if you make a subject exciting then kids and adults will actually want to learn?

If you need evidence of that just take a look at the growing numbers of both the Loughborough Male Voice Choir and the Caroline Sharpe Singers. It is surely no coincidence that both choirs are currently enjoying something of a boom in membership, though the reasons for both are maybe a bit different. The LMVC had been struggling in recent years to replace members who had left, but since September about eight new faces have joined and seem to be here for good.

Perhaps the change in appearance has helped and I don't just mean the bow-ties. The choir now sings with a smile on its face which dare I suggest hasn't always been there in the past? We are the 'grumpy old men' no more! I'm pretty sure that has come over more during the last year or so to such an extent that one of our new members and by far the youngest, (Peter) was moved to ask if he could join just before Christmas. Clearly, make it look like we are actually having fun and people will want to join in. Simple?

That is also the reason behind the success of Caroline Sharpe Singers. Caroline I think (beware: football analogy approaching!) is the Sam Allardyce of singing! Like Mr Allardyce, Caroline takes a bunch of individuals of varying levels of ability and manages to get the best out of them. Who would have thought that the random bunch of individuals that initially formed CSS a short time ago would soon be singing One to the standard we did last year?

The most important ingredient within both choirs is simply this: FUN. If that was not there we wouldn't do it. The fact that it is, is down to the skills of the talented pair, Chris Hill and Caroline and their ability to add it should not be underestimated.

This morning (Monday 3rd) Ruth and I went over to Caroline's for a lesson. It  is now less than two weeks until our singing exams - Grade 4 for Ruth and Grade 5 for me. Ruth will be accompanied by Gail while I will be accompanied for mine by Caroline herself, stepping in for Nest Harris who is otherwise engaged on the big day. There is both good and bad things about being accompanied by Caroline. There will be something reassuring about having her there, but on the flip side, she will hear every note and word I sing, so there will be absolutely no escape if I mess up.

But I won't mess up. I'm gonna be great! This time I know what to expect so hopefully I will be able to sing with a bit more freedom. I want a Merit this time! We'll see eh?

Meanwhile, the revamp of the LMVC website is slowly but surely taking shape and right on cue, the Shepshed & District Camera Club have delivered a CD of photos from their recent shoot at one of our rehearsals. And a pretty impressive job they have made of them too. There are some superb shots and also one or two that would be perfect for a caption competition! So as a little taster of what to expect from the new website I  will leave you with just two of the sixty-odd photographs.

See you next time! 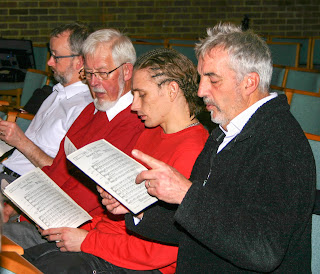 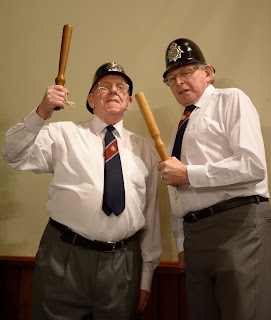 'A Policeman's Lot is Not a Happy One' according to Tom Carter and Gerald Morling.
(Photo courtesy Shepshed & District Camera Club)
Posted by Alyn at 14:41