and so to Kegworth

Okay, so 'a day or two' means a week in my language okay? I'm a busy man me, what with singing, working AND my OU study starting this week! So here we are again for 'A Nightingale Sang..'s look back at last Saturday's concert by the Loughborough Male Voice Choir, at Saint Andrew's Church, Kegworth.

After Thursday's final rehearsal I was slightly concerned about this one as things seemed to be a bit untidy. One or two songs that we have sung well in the recent past suddenly seemed  a touch ragged. Oh well, it'll be alright on the night I suppose? We all arrived at the church in good time to start the warm up and the painful process of sorting out who stands where. Due to a lack of steps, shorter members were needed to stand in front - much to Jim Lacey's disgust. Jim you see, just does not do 'front row', so well done mate! I know it is a bit of a shock to the system when one first ventures out front. You do feel a tad exposed to say the least, so thumbs up for going with it.

Particular emphasis was placed this time on trying to look professional. We were to walk on formally, burgundy folders (more of them later!) under right arm, assume positions and DO not open folders until Mr Hill gives the signal. Then when returning to our seats DO NOT sit down until Lyndon gives the signal.

Oh dear! First song was Stout Hearted Men and good ol' Chris forgets to give the signal. Bless him! Some waited, some didn't. I felt a bit of a plonker waiting there with mine closed while others opened theirs.  This set the tone for the rest of the evening with no-one waiting for a signal at all by the end. As for the sitting down, I confess to being guilty (twice!) of sitting down before Lyndon's signal, leading Derrick to mutter behind me about what a useless bunch we all were! Well maybe so, but good habits aren't going to be instilled in us overnight. These things need to become second nature and they will in time.

The second song was Saints, one song we've sung very well, but like Thusday's rehearsal, was a bit untidy I thought. In truth we hadn't rehearsed it much on the run-up and that was a mistake I think. Following that was Speed your Journey which I love.

Time then for the 'Guest Soloist', a Loughborough Soprano called Caroline Sharpe. She is "a singer and singing teacher" and "has a special gift of enabling people to sing when they tell her they can't" according to  the programme notes. Well, I can vouch for that! Caroline sang O Had I Jubal's Lyre by Handel and then something else which I have will ask her about later, sorry. She said that she made a lot up during the course of the evening and that's another of her 'gifts' - the ability to sing gibberish without anyone noticing! Brilliant!

Michael Dukes and Gerry Brennan then did their Flanders and Allen stuff, but I'm afraid I couldn't hear them well enough to get the benefit of the humour. The audience seemed to enjoy the guys anyway. To wrap up the first half it was folk song time with Pleasant & Delightful, which was I think our best ever rendition. I think I've said that the last couple of times we've performed it so I guess that means we're getting better and better. Caroline noted afterwards the expression I at least tried to add to my bit while Ruth still thinks I need to let myself go a bit and she is right. That's definitely the next aim - to visibly enjoy it more!

I don't normally talk about the 'Interval' much, but this one was particularly enjoyable given the amount of wine that flowed. I enjoyed a very nice glass of 'red' and I wasn't alone. Not sure what the purists would say about the effect of red wine on the vocal cords, but frankly, who cares? ;-)

Part Two kicked off with Viva l'amour and thanks to our new member Miguel who was watching in the audience, we were trying to ensure we pronounced the word 'amour' as in 'love' rather than 'death'. What was the verdict Miguel? Following that was Moon River (don't like it!) and He Ain't Heavy (love it!)  before those Shanty Folk nipped off to do a surprisingly quick costume chaKge. Their first was a new one to me, but I recognised Roll Alabama Roll which was fun! The Shanty Folk are always entertaining and go down well, so bravo I say!

Maria and Tonight followed with Lyndon Gardner staring in the former. Then Caroline performed her second solo set in her usual stunning fashion. First was the appropriately titled September Song by Curt Weill and then Adele's Laughing Song from Die Fledermaus by Johan Strauss. Marvellous stuff again. One can't get enough of the Caz-meister in my humble opinion!

That just left the lads to finish off the evening with Every Time We Say Goodbye, Amarillo and You'll Never Walk Alone. Caroline joined us for the latter, singing the first verse and blowing us all off the stage with the closing 'alone'!

So that was that. A good concert I think but with a few things to think about. Yes, we need to brush up on the professionalism somewhat, but there is also the issue of singing without copies to grapple with. The point was raised at the AGM as to why we should sing without copies at all. Well in answer to that, one only needs to ask the audience. They say that we look better, sound better and actually engage with them when we are not forever gawping down at our burgundy folders. In this concert we were gazing at copies to sing even Saints, Amarillo, He ain't Heavy, all of which have been sung without copies before. We even won a competition singing He Ain't Heavy without copies, so why the backward step?

I know that new members have joined and can't be expected to learn everything instantly, but why not have the new guys on the back row where folders would be less noticable? The sad fact is, however well you know a song, if the folder is there you will look at it. Take it away and see what happens. Invariably you know more of a song than you think you do. Amarillo simply must be sung without copies. Chris Hill once took mine off me in a rehearsal, leaving me to just manage - and I did. We can all then clap with ease and get the audience joining in, which is the whole point of singing Amarillo anyway!

One other piece of feedback I received was that there seemed to be some songs that were a bit 'samey', with too much 'ooh-ing' and 'arrr-ing'. Well, I can remember saying to Terry a while ago during a rehearsal "have we actually sung a proper word yet this evening"? Added to that feedback was another comment that there should be more old fashioned Male Voice Choir songs like Speed Your Journey and Deus Salutis to provide those 'hairs on the back of the neck' moments. So I guess there is a balance to be struck between attracting younger audiences and members by adding more modern songs to our repertoire while maintaining enough of the traditional material to keep the older member and audiences happy. No worries - in Chris Hill we trust!

So no rest for the wicked. Next Saturday is another away fixture as we make our trip to The Valleys as guests of the Merthyr Tydfil Ladies Choir. You may well have the benefit of a 'guest blogger' for this trip as Ruth has offered to record the weekend's events from the perspective a supporting wife. I will leave you with a selection of photographs from Saturday taken by Ruth. She has also put together a short video/soundtrack featuring an excerpt from the the finale which you can view by clicking here

See you next time!
Alyn 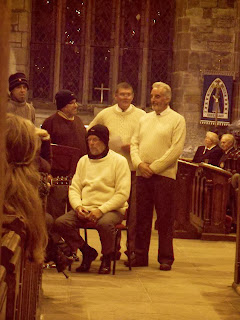 The Shanty Folk at Kegworth 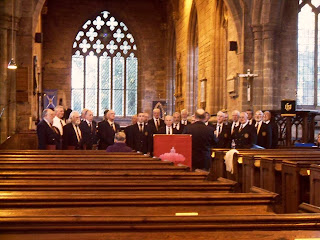 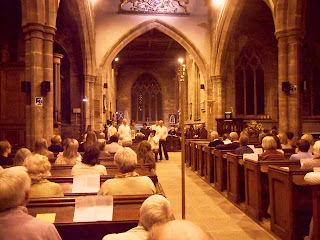 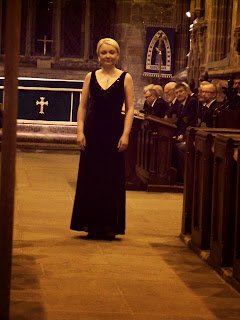 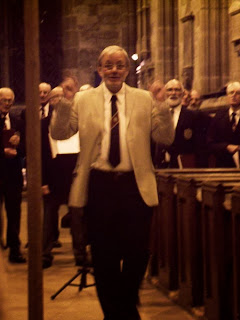 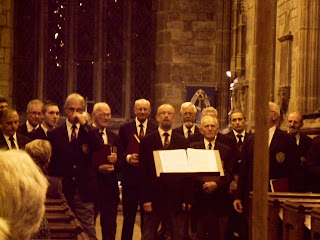 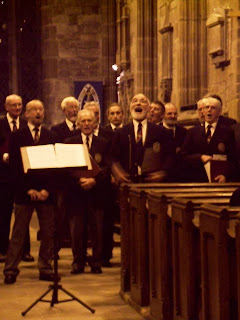 Chairman Chris Higgins trying to catch a moth during
during Pleasant & Delightful! 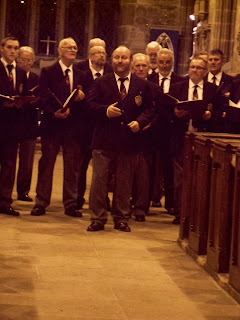 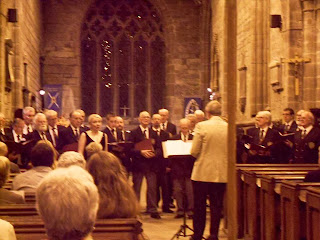 Caroline Sharpes joins us to sing the first verse
of You'll Never Walk Alone
Posted by Alyn at 20:09