Well another cracking night was had by all as the Loughborough Male Voice Choir performed for a good sized audience at St. Andrew's Church, Kegworth on Saturday night. But, before I give you all the run-down on that fine evening's entertainment, I'd better bring you up to date on the Caroline Sharpe Singers. I'll spare you the feeble excuses for the delay and just get on with it okay?

Yes indeed, after the triumphant Enchanted Tour of 2012 a return trip to the Norfolk/Cambridgeshire region was always a possibility and a date in March was secured by Caroline for Saturday 31st August. That's March the village as opposed to March the month. Ha-ha! This 'away' gig would naturally necessitate a coach trip and late return but hey, we were up for it! The concert would involve Caroline Sharpe Singers and Enchanted plus the music of a newly formed foursome called Cantabile Brass, comprising Paul, Nick, Emily and Jo. 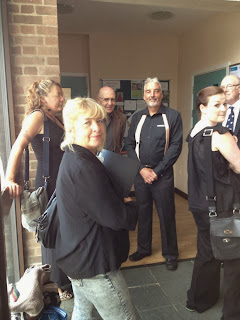 Waiting for the coach...

So, despite the words of 'Masquerade' stubbornly refusing to adhere to my brain-cells (and I wasn't alone there!) we assembled at Trinity in good time to board the Ausden Clark coach. Now anyone who has watched the hysterically funny sitcom '2012' about the Olympic Games Deliverance Committee, may remember a fantastic episode where the committee were to take a bunch of foreign dignitaries to the Olympic Park, but never quite got there after a farcical coach trip around London. Well, our journey to March took on bizarre similarities to that trip. The route we took I am yet to fully fathom, but there was a point when I felt like shouting out to the driver "whatever you do, don't go through the Dartford Tunnel, cos that would be like, madness"!

But we got there. Eventually! I spotted a Fossil Shop as we drove through March, but was cruelly denied the opportunity to have a 'butchers'. No matter, singing was afoot, and a quick rehearsal, before a pre-gig bite to eat. Between us, the Kings and the Oldales, we had assembled a banquet fit for a multitude. I would estimate there was enough left over to fill twelve baskets at least!

Preparations for the concert were, how shall I put it, interesting? Such was the size of the audience, there was woefully inadequate seating left for us artists, so we had to hastily arrange a few rows of seats along the sides to accommodate us all. 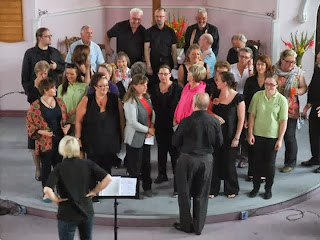 Caroline Sharpe Singers getting organised
before the concert in March, Cambs.

On to the concert and it started well with I Will Sing with the Spirit followed by Locus Iste which itself did start well, but the 'dreaded note' got to the tenors again! 'Irreprehensibilisest' began with a quiet horrible clash. I was confident I was hitting the right note, so increased my volume and prayed. Thankfully the whole thing didn't fall apart and Locus rescued itself. Phew!

Enchanted were great yet again performing seven songs in the first half including Hallelujah and my personal fave, Fever. It was nice to see the 'college girls' back in the line-up too! In between the girls songs we were treated to three tunes from Cantabile Brass. The one musician that stood out for me was the Euphonium player. The quality of tone he produced from his instrument was truly breathtaking and I felt compelled to tell him so after the concert. In the second half they rounded off their set with an ambitious rendition of Queen's Bohemian Rhapsody, which they had only thrown together days before apparently! Well, it was brilliant guys!

Other highlights were Enchanted's Chatanooga Choo Choo and the ol' fave, Oklahoma Medley which was the gals at their best. Then of course there was Masquerade. Strangely, the issue of singing without copies became pretty much academic as we didn't use copies for anything. And it showed in the performances. There's something a bit naff about standing in front of an audience with your folder of music I think. It would've been impossible to read any music anyway as the splendid Masquerade mask prevents spectacle wearing anyway. Despite a few rough edges, Masquerade went pretty well and the soloists did a great job just when they needed to. After a bit of a mess first time in rehearsal, they did great on the night. Special mention must be made of the staggering versatility of my wife Ruth. Standing in for the Alto Masquerade solo in the Sileby gig, this time she took the Soprano solo. Look out Jeff and Terry - you could be next.  Bravo all!

It seemed the audience really loved this concert, with the compere talking about wanting to make it an annual event. I have to say, there really is something special about singing in front of such an enthusiastic and receptive audience. Sometimes an audience can be a bit flat leaving you unsure as to whether they've enjoyed what they've heard. No such doubt with the March audience and it would be a pleasure to return.

The return coach trip was marginally less random than the outward trip and was highlighted by a music-less 'pass-the-parcel' game won by I know not who. There was also a rendition of an alternative Almost Like Being in Tune (love).

Well, I will leave you with that for now and return in a day or two with a round-up of the Male Voice Choir's concert at Kegworth.