Anyone who follows this blog and pays any attention to the viewing stats (okay, that's unlikely, but you never know) will have noticed a bit if a surge in visitor numbers over the last week. I was curious to know where these visitors were coming from and suspected a few from Wales perhaps? Sure enough, a sizeable number have found my humble blog via The Fron's own website, where they have included a photograph of the concert together with a link to 'A Nightingale Sang...' and my review of the concert!
Well, ain't that great? I emailed a contact at The Fron website thanking them for the link and asking for permission to use the photo. This morning I received a reply from Jon Haddy the web manager of The Fron who says he enjoyed reading my blog and has also sent me two photographs of the concert which I am free to use. I have also received an email from Allan Smith, the treasurer and 1st tenor with the choir who also thanked me for my blog report on the concert and has said that if I'm ever  in their neck of the woods, to feel free to call in to one of their rehearsals! Now there's an offer one simply cannot refuse! Now, where is Froncysyllte - pass me the road atlas!

So, it's time to play 'Spot the LMVC members' For a close up view, just click on the photo:- 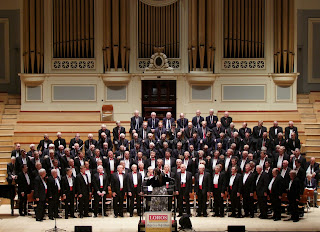 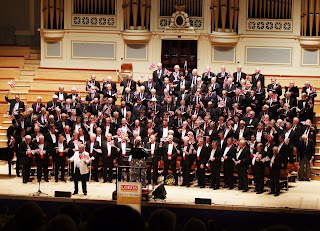 The choirs with Union flags a-flutter for 'Rule Britannia'.
(Photo courtesy The Fron Choir)
I am not aware of anyone from our choir having any photos of the event, but if you do, please let me have a copy and I will feature them in this blog.
That's all for now!
Cheers,
Alyn.
Posted by Alyn at 12:51 No comments:

LOROS Concert with 'The Fron' at De Montfort Hall, Leicester.

Okay, I will put an end to the suspense straight away. I’m sure you are just itching to know exactly how a long, brightly coloured rubber band fits in to a singing lesson are you not? Well, during Wednesday evening’s warm up Caroline produced the aforementioned item and yes, it is rubber, long and rather like a scarf actually – only made of rubber!?!

The idea apparently, is that you stand on one end with your heel while holding the other end and as you sing a scale you stretch the band as you ascend, reaching maximum extension as you reach the highest note. Does it work? Well, I found that the very act of pulling the band distracted me somewhat from the actual singing, so I'm not sure it achieved much. But maybe I need to give it a few more goes before dismissing it as complete tosh! I can see the logic behind it and maybe with a bit of persistence it might produce something. The wobble board though definitely works. In fact I have a similar device myself, purchased a year or two ago to help strengthen the muscles surrounding my highly dodgy knee joints. So I’ve had a practice singing while standing on that recently and I think the annoying leg twitch may soon be a thing of the past. Hoorah!
I’m happy to report that Wednesday’s lesson did shed some light on the annoying mucous problem. For the third lesson in succession, my performance has been hampered somewhat by mucous making my voice sound croaky and rattly which isn’t at all pleasant. Caroline stopped me at one point and asked me to sing in’ lah-lah’s’ rather than words and lo and behold, as if by magic, the croaks disappeared and a tone reminiscent of that stand-out lesson of a few weeks ago, re-emerged.
So maybe I haven’t got a mucous problem at all. Perhaps all I need to do is sing properly! Sounds a bit stupid when I put it like that, but it probably is as simple as that. Over the next week or so, I’m just going to try singing ’lah-lah’ to my songs and practice ‘opening out’ the voice. Once that becomes a habit I’ll have it cracked I reckon. It is just so easy to slip back into the old habit of singing with that feeble ’throaty’ voice that is so naff. So while Wednesday’s lesson was all a bit messy, it was perhaps the most revealing and might just prove extremely valuable in the long term.
Thursday night’s LMVC rehearsal was again an improvement on the previous week. Some of the required pieces for the LOROS concert are coming together (about time!), but some are turning into a bit of a nightmare. Love is like a Red, Red, Rose is a song that I simply don’t like. Sorry, there is no use skirting round the fact, but I just don’t. Then there is Nobody Knows the Trouble I See. Oh dear! Nobody knows the trouble I have with this bloody song, that’s for sure! It’s beginning to make Is this the Way to ? seem like a personal favourite! But, as my beloved employers Balfour Beatty might say, if you’re going to be a member of a choir, you’ve got to be a ‘team player’. There will inevitably be songs I will love and some that I don’t, but that is just the way it goes I guess.
There was one hilarious moment during Thursday’s rehearsal. I think it was during one of the above two pieces, probably the latter, when I got it horribly wrong, Peter Bateman got it horribly wrong and we both looked at each other with that look of complete despair. I cracked up and just couldn’t stop laughing! I thought Chris might make me go and sit on the 'naughty step' at one point, but I was reprieved. I console myself with the thought that at the De Montfort Hall there will be such a large massed choir that any gaffes will be suitably disguised. Let’s hope so eh?
Onwards and upwards then? Tonight, my lovely wife Ruth and I will have a run through some songs in preparation for Saturday morning's rehearsal of the Caroline Sharpe Singers. The rehearsal will be rapidly followed by a trip to Long Eaton with Chris Hill and Mike Godwin to discuss arrangements for the male voice choir gig there in January, such are my new found responsibilities on t'committee!
Keep y’all posted.
Cheers for now,
Alyn.
Posted by Alyn at 14:10 No comments:

Four Weddings and (as yet) no funerals!

I bet the bride and groom at Saturday's wedding in Wymeswold couldn't believe their luck! I don't suppose they will have envisaged bright sun and soaring temperatures when booking their wedding for October the first! What a bizarre climate we have these days - blazing hot April and October with the coldest summer for 20 years sandwiched inbetween. All very strange, but mustn't grumble eh?
Saturday's proceedings kicked off with a brief rehearsal round at Caroline's house. This went quite well once I established the pitch of the first note of my tenor parts. For the first run through of 'Praise My Soul' I jumped in an octave too low, which was a bit on the 'bass' side. 'Oh Lord My God' went much better and I was then all ready for the wedding. Much merriment was caused by a knock on the door as someone called to ask Caroline about something or other. I think the poor guy was slightly shocked to encounter a choir belting out hymns as she opened the front door!
So off we went in convoy to Wymeswold. On arrival, the eagle-eyed quickly spotted several RAF uniformed chaps outside the church. Personally, I was rather more interested in the GORGEOUS, bright RED classic Jaguar outside the church. A Mark 2 I think, though I may be wrong. T'was a stunning vehicle though!
Inside the church, the choir were to be situated at the front in a part which probably has a specific name, but I confess to being somewhat ignorant of such things. Today's choir was made up of all the gals from 'Enchanted' plus Diane, Dorothy, Sue, Shirley, Michelle, my lovely wife Ruth, sis-in-law Julia, Jeff, Jake, Sean, Ian and yours truly. Hope I've not forgotten anyone there! The vicar gave us all a quick run through of 'the geography' of the wedding as she termed it and said that we'd really need to try and project our voices out to the congregation, something that I think we more than adequately achieved.
Credit is due to the bride who was true to her word and arrived pretty much on time. So,  off we went with Oh Lord My God and despite a somewhat tentative first verse from myself, I got into my stride with the final three. One could sense that today's choir was sounding rather good, although it's not always easy to tell. The second hymn again required a tenor part but only in the second verse. This was going well until the last line which I got hopelessly wrong and it all rather fizzled out. After that it was a straight forward rendition of Jerusalem and the usual We pledge to One Another during the signing of the registers.
I must say, despite my one gaffe, this was the best yet. The choir sounded good and the congregation apparently stopped singing during one particular hymm just to listen to us! Cool! The bride and groom left the church through a line of swords outside the church, but we obviously missed this spectacle which was a shame. There were lots of appreciative comments about the choir afterwards, particularly from the bride's father, so it was another job well done and a fun day!
Nothing else for it but for family members to round off the day with a meal at The Quorndon Fox with Ian and Joyce. Despite acquiring third degree burns to the roof of my mouth, thanks to the unfeasibly hot beer-battered mushroom starter, we enjoyed a cracking meal - the chicken, ham and leek pie is to die for! Mmmmmm!
Now my attention must be directed towards the LOROS concert and getting those songs learnt. Prior to the next male voice choir rehearsal though is another lesson with Caroline where the use of the strange rubber band thingy will be revealed!?!  So watch this space!
Cheers,
Alyn.
Posted by Alyn at 08:53 1 comment: