Songs for Summer - in Woodhouse and Whissendine

Apologies to Neal Chantrill for the longer than expected wait for this post, but it has been another crazy few weeks at Chateau Knightthorpe. I won't bore you with the details, suffice to say it involves the complete incompetance of the banking sector. A good 'sing-song comes as a blessed relief!

Thank the Lord for another Caroline Sharpe Singers/Enchanted concert, this time at Woodhouse Baptist Church on Friday 29th June. This promised to be something of a challenge in view of the severe lack of Jeff Buckley. Jeff is a very accomplished singer and a steadying influence on us men in the choir. With just me, relative newbie Paul, and complete newbie Terry, it promised to be a tricky one. Paul's presence was in some doubt following a flood at his home, but make it he did in heroic fashion. That said, us men were boosted in the shape of my wife Ruth and Caz-2, a.k.a. Caroline Jones, who were going to sing the 'men's parts' for a few of the songs. Thankfully Ruth left the tweed jacket, false moustache and pipe at home this time!?!

We all assembled in good time and I sensed a general excitement among us all. I had had a rather quiet day, retreating into my now usual pre-concert ritual of trying to chill a bit for the majority of the day. With Brindisi included in the night's programme, whichb included a solo verse for me, I felt nervous but not unbearably so. After struggling with a particular high-ish note in rehearsals, Caroline offered me the 'get-out clause' of singing a lower note in its place. This was grabbed by me eagerly and probably helped me to sleep the night before!

So we proceeded with a short warm up. and a quick run through a few, including good ol' Brindisi, the 'Drinking Song' from La Traviata. After singing a bit of it Caroline quickly stopped me to point out my extremely tense posture. That's putting it politely. I was as rigid as a wooden plank and holding my music folder clamped to my waist. Honestly, aren't nerves weird things? And embarrassing? I then made a concerted effort to relax a bit. For some reason, I seem to be most nervous for pre-concert warm ups, which I suppose is good as it gets it out of the way early?

Anyway, a modest but reasonable audience assembled by 7 o'clock including a young girl called Katie and her dad who I know from Loughborough Quaker Meeting and who is coincidentally having singing lessons with Caroline! Also in the audience was none other than Chris Higgins, Chairman of the Loughborough Male Voice Choir. Obviously at a loose end with his wife away for the weekend playing golf, he decided to check out CSS and perhaps a fellow choir member who was going to sing a solo bit? Nice to see you there Chris! 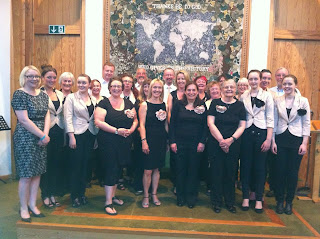 Caroline Sharpe Singers started proceedings with Rutter's I Will Sing With the Spirit which was pretty good, followed by Pachelbel's Canon in D which also went well. Then came the first problematic number, Panis Angelicus. Not that it is particularly difficult, but somehow I seemed to struggle to hit the right notes in certain places. Hey ho, my blunders weren't too noticeable to the audience apparently so what the heck.

Enchanted then followed with five cracking songs including the (err, how shall  put it) variable (?) Soldier, Soldier. When this piece goes wrong, it goes wrong big time! However, this time the girls performed it better than they have for a while!

The next selection were songs from operas, including Barcarolle, Habanera and then a quite magnificent solo performance of Summertime by Holly Coutts. Quite breathtaking I thought. The unfortunate thing is that it was then the job of me and Anna to finish off part one with duet of Brindisi ably assisted by the rest of the singers. While I was rigid with nerves earlier, I had now been taken over by that steely determination to get the job done. Oddly, I messed up early by making a complete 'pigs-ear' of  the word 'fuggevol'. Not once, in all the time I was learning the song did I ever mess that word up, but chose my first performance of it to do just that. Sigh! Never mind, the good news is that rather than stop and say 'oh pooh' or something similar, I actually blurted out something vaguely Italian sounding and kept going! So that's progress I guess? There were a couple of other minor goofs but all in all a creditable attempt I think. Anna's second verse also contained some Italian-ish gibberish so I was not alone.

Following the well earned half time brew and biccies it was Enchanted again with some songs from West Side Story, including Olivia singing Somewhere, which was really beautiful and possibly the best I've ever heard her sing!

Next up it was us singers again with Windmills of your Mind and Almost Like Being in Love. The former was great, while the latter was, from my position, a disaster! I confess I lost it in calamitous fashion on at least three occasions and struggled throughout! Let's move on.....
Enchanted then restored order and got the audience singing along to the Beatles All you Need is Love and the Oklahoma Medley. That just left all of us to return to the stage for the now epic finale of I Believe. And EPIC it was, again. I loved it!

Initial feedback suggests the concert was enjoyed by all particularly the gentleman who introduced us and gave his closing speech of thanks. Rumour has it that we've been invited back at Christmas, so that's great!

The following night, i.e. Saturday 30th June, it was my turn to observe, or rather be cameraman to  film Enchanted in concert with the Belvoir Wassailers in Whissendine Village Hall. This gig turned out to be another fun night with some joint numbers with both the Wassailers and Enchanted. Robert John Edwards conducted an ambitious joint rendition of the Oklahoma Medley, which had all the audience clapping. Fantastic stuff. I just love Rob's energetic conducting style and think Caroline should try similar? Okay, maybe not.

The real tear jerker of the night of course was duet of Over the Rainbow by Caroline and a little girl called Amy. This girl's family had been through a traumatic experience earlier on, but she was determined to sing it. With Caroline's guiding hand she did it and had half the audience in tears. Well done Amy!

Rather than go through the whole programme, I will direct you to Youtube, where the best bits from this concert featuring Enchanted and Caroline will appear shortly on the Channel 'Enchantize'. Take a look soon - give me  acouple of days okay? The link on the right hand side of this blog should get you there.

I think we now have a gap of a week or two before the next commitment! Pass the corkscrew?