No rest for the wicked

Such is the congestion of concert engagements at the moment and the severe lack of spare time to blog about them all I will have to give a fairly brief run through the latest three. Yes, three! With a fixture congestion akin to Bolton Wanderers in the Championship, the Coward household has just been subjected to three away fixtures in six days! Thankfully a bit of squad rotation that Dougie Freedman (who?) would be proud of was possible, in that I played in the first, while Ruth and Amy took to the field for the second. Then I returned to the first team along with the LMVC's on loan secret weapon Anna-Ruth, for the third.

Okay, that's stretched the football analogy well beyond breaking point, so I will explain.

Sunday 26th May was the date for the Male Voice Choir's now annual tradition of Singing in the Park, under the Bandstand in Queen's Park, Loughborough. In the week prior to this, some of the keen followers of our Facebook page will have seen some strange images of dolls. No not voodoo dolls as Messrs Weston and Booth seemed to think, these were Teru Teru Bozu dolls. I won't waste time explaining all about them now, you can just click here and read for yourself. Suffice to say, no choir member was ritually sacrificed, and the little chaps worked a treat in keeping the rain away for our outdoor gig! In fact, it was the best day's weather yet for our gig in the park, with the beautiful weather guaranteeing a great audience. The highlight for me was Pleasant and Delightful in which I think I gave my best effort yet at my solo third verse! Ruth and Caroline certainly approved and there's no sterner critics than those two! 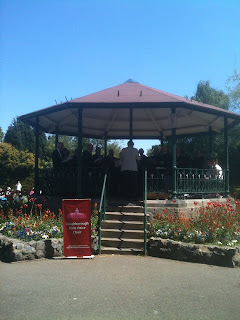 The Loughborough Male Voice Choir perform for the sun-drenched crowds
at the Bandstand in Queen's Park, Loughborough, on Sunday 26th May 2013.
(Photo by Ruth)

What a great, fun day in the sun it was. Same again next year I hope Mr Hill?

Next it was the turn of Ruth and Amy, who were singing in Caroline's latest venture, Music in Me, a ladies singing group that meet in Woodhouse Eaves every Tuesday. Rather like Caroline Sharpe Singers, this choir has grown from modest beginnings to a good sized group and Friday at the Methodist Church in Woodhouse they performed a concert as part of a preview of an art exhibition and was their second public appearance. It was to feature solos from both my wife Ruth and my step-daughter Amy as well as Gail Morgan too.

Well, I was well proud of both of them! Amy's powerful rendition of To The Sky was mightily impressive and amazed everyone I think. Slowly but surely Amy is growing in confidence and is showing it in performances. Not that you'll ever hear her admit it though!

And my wife nearly had me in tears! She swore that she would never, ever sing solo, but somehow, the ever persuasive Caroline had successfully twisted her arm to sing the Carpenters song Rainy Days and Mondays. And she was bloody marvellous as my Soundcloud recording proves. I think she genuinely surprised herself at how good she sounded. Well done Mrs Coward! How about November?

And finally, it was my turn again as the Loughborough Male Voice Choir performed a concert at the request of Sileby Methodist Church. Guest soloist for the evening was step-daughter Anna of Enchanted fame. This engagement naturally required a brand new frock - for Anna, not me! Obviously? Anyway, thankfully Ruth was to accompany Anna to town on Saturday morning to search for said frock. Apparently things were getting desperate when the perfect dress was located on Loughborough Market. Stunning it looked too as the photo below shows. 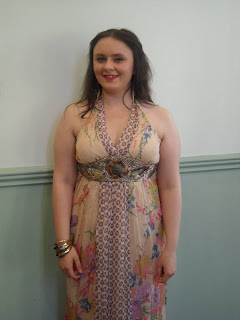 Nothing quite so glamorous for us chaps, just the usual blazer tie outfit. No bow-tie this time strangely, but what the heck. Again we had the now comic ritual of getting 30 plus men organised on stage in slightly less shambolic fashion than the May 18th gig. No need for Lyndon to blow a gasket this time! One member noticed the lack of Derek. Strange that he hadn't made it we thought until he suddenly emerged, as if by magic, from the toilet! When did he arrive? No-one saw him come through the front door. Spooky!?!

Hey-ho, on with the show. This proved to be a much better balanced show than the concert with Enderby Band, with much less 'clutter'. Just enough of each and a concert of just about the right length. I think one slot each by Lyndon and Mike & Gerry was right, giving our guest  three songs on two slots.

And Anna did not disappoint. I know I'm a bit biased, but Anna performed with a quality and confidence that belies her young age. Silent Noon, followed by I Could Have Danced All Night were superb. She assures me she was very nervous before she started , but it wasn't evident to the audience. her final song in the second half was What Good would the Moon Be? which was new to many of the LMVC chaps, Paul Blakemore included and was met with quite some acclaim! Well done girl! Methinks it won't be the last time Anna guests for the LMVC - not if I have anything to do with it anyway.

While, I mention Paul Blakemore, perhaps I should mention another of the evening's highlights - the Blakemore arranged Blue Moon. This song continues to feel a bit of a mess when we're singing it, but as Ruth managed to record the entire concert, I could at last listen to what the audience hears. I'm happy to report that it actually sounds pretty damn good. The seemingly disjointed four parts all come together as a rather delightful whole. Nice one Paul!

My final highlight of the night was to see John Culpin join the choir for Gwahoddiad. After years too numerous to mention, John is sadly retiring from the choir and if ever a man is worthy of being awarded a 'life membership' it is this man. I'm sure I speak for all of us when I say thanks for everything you've done for the choir.

I'll leave you all with a selection of photo from the concert, while us at Chateau Knightthorpe enjoy a well earned rest.
See y'll soon! 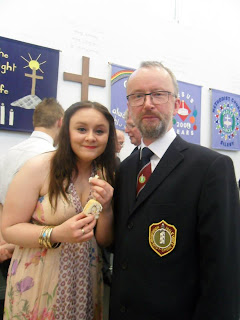 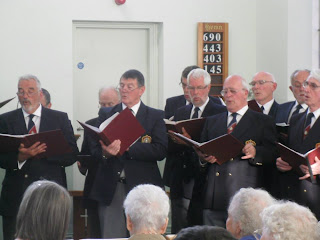 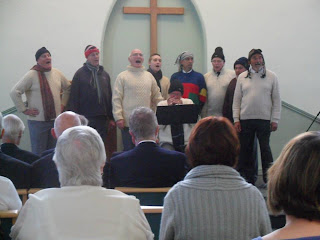 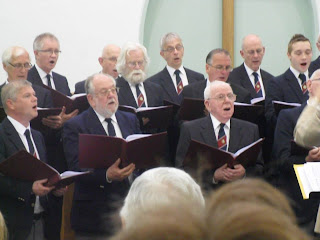 Another LMVC photo without me on it!
(Photo by Ruth) 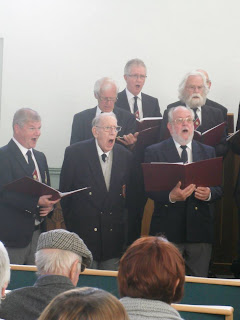 John Culpin joins us for Gwahoddiad
(Photo by Ruth) 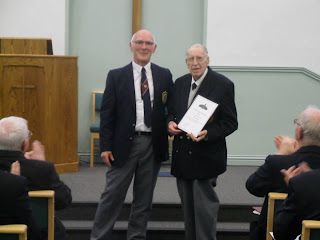 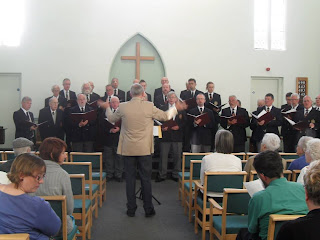 The Loughborough Male Voice Choir, conducted by MD Chris Hill.
Wey-hey, I'm on this one!
(Photo by Ruth)
Posted by Alyn at 22:34 1 comment: