Alfie Boe in Concert at the N.I.A, Birmingham - 22nd March

Sometimes when you gear yourself up to seeing a favourite artist in concert things don't quite live up to the expectation. Thankfully no worries with Alfie Boe. The evening was simply brilliant from first note to last. In truth it wasn't quite what I was expecting, but expectations were surpassed with a concert that will live long in the memory.

Sickeningly the day coincided with a bad week in Ruth's continuing battle with the annoyingly unpredictable illness that is M.E. or chronic fatigue syndrome. Unrelenting pain and fatigue were refusing to clear making the trip to Brum  a non-starter for her. She took the decision to stay at home which was such a shame, but hopefully we'll look for another opportunity to see the man another time soon.

So it was down to just Anna and me to battle through the sprinkling of snow and find the Travelodge which is situated a mere five minutes walk (or ski?) to the arena. Birmingham Central Travelodge is one of the older ones and thus is a bit tired looking and in need of a bit of an overhaul. In particular dire need is the lift which is one of those that fills you with utter dread. Doors that were reluctant to close and which randomly opened at either floor  8 or 7 depending on it's mood! And the rattles, bumps and shakes inspired little confidence that we would ever get out of the place alive!

Never mind, we walked in a minor blizzard to the massive venue and after a lengthy search, eventually found the merchandise stall.  Anna already had her T-shirt having ordered weeks before online so settled for a notebook. I gave the clothing a miss in favour of a couple of Alfie mugs! One for Ruth and one for me! Sorry Peter Kay, but the Alfie mug is now promoted to the position of fave brew holder of choice! 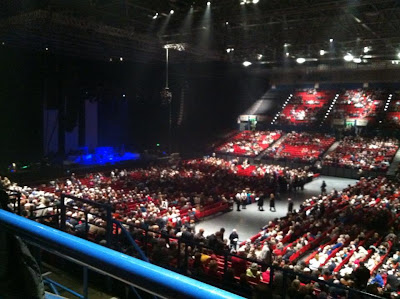 The National Indoor Arena, Birmingham filling up prior to the concert.

Now, inside the vast arena we actually had cracking seats - front row of the upper tier so had a great view. Right on time at 7.30pm the support artist Emilia Mitiku did about 25 minutes of her songs. She was fine, starting slowly but was pretty good actually and passed the time nicely until the 'main man' took to the stage.

The set started with a drum solo as the band assembled and the neatly coiffured Alfie Boe arrived to something of a roar from the sell-out audience.  He presented a very different set of music to what I was expecting, but it was brilliantly put together and perfect for this venue. The musicians on stage were the obvious clue as to what to expect. A string octet plus a trombone, trumpet and saxaphone as well as drummer and guitarists should have told me that operatic arias and musical theatre numbers were not likely to play a major part. Instead songs from his new album 'Storyteller' was to form the bulk of his set. Well, it is the 'Storyteller Tour' after all! He started with The Sun Ain't Gonna Shine Anymore' the Walker Brothers song which was just the perfect opener. He followed with Bridge Over Troubled Water; Can't Help Falling in Love; the old Stones Song Angie; Roy Orbison's It's Over, which was perfect for Alfie's powerful voice; Elvis' It's Now or Never and others. Emelia Mitiku actually joined him on stage to duet on two songs and I can't recall ever seeing a support act join the main act on stage before. 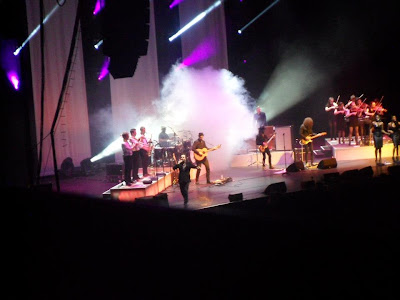 Alfie Boe on stage at The National Indoor Arena, Birmingham. 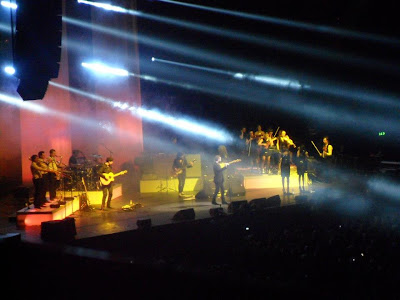 He changed the mood superbly well as two sofa's were brought on stage and he did three ballads accompanied by accoustic guitars. I used 'Soundcloud' to record one of these which came out surprisingly well. You can have a listen if you can find me on Soundcloud. 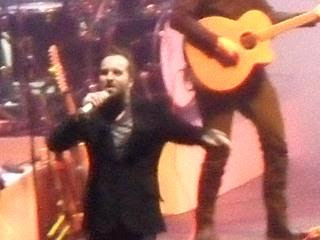 A somewhat blurred close-up of Alfie Boe on stage
at The National Indoor Arena, Birmingham. 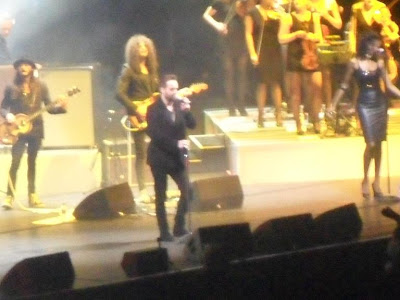 Alfie Boe and band. Note the Guitarist with the Brian May hair! 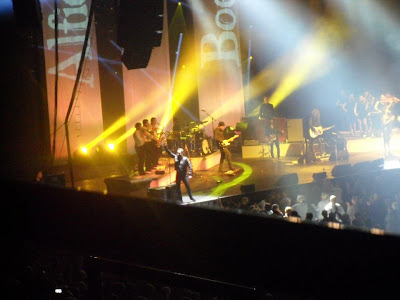 Alfie Boe gives us a wave!

Opera and musical theatre weren't completely forgotten about but were given an interesting twist. The song I wanted to hear above all else was of course the legendary Bring Him Home from Les Mis. Here it was performed with just an acoustic guitar and a violin or two. And it worked so well it makes me wonder about a future performance with the LMVC for me with Chris Higgins accompanying on guitar? Hmm!?!
Anyway, absolutely brilliant that was, and the audience loved it!

Mr Boe is certainly a performer who knows how to handle an audience and made frequent pauses to thank the audience for what they had done for him and he seems a genuinely humble man who just loves what he does for a living. To be honest we could've done without some of the ladies shouting out their undying love for the man. One shouted "Alfie, you're so FIT"! "Oh", says Alfie, "does that mean I'm very healthy or just good looking?"

He completed his set with some real 'rockers', including his at times wild and enthusiastic dancing. There was even a Jimi Hendrix song but I forget the title. He finished his set at around 10 o'clock and as the lights were yet to come up most people knew an encore would follow while some lunatics decided that getting out of the car parks was more important than sticking around. Why do people do that? Fools! 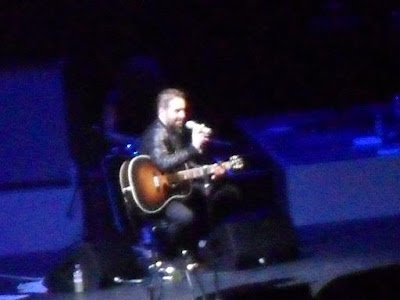 Alfie's encore. He reckoned he'd been practising the
chords for three years and was hoping to get them right!

Alfie returned to the stage with his guitar for one final song to round off a fantastic concert. I can't remember an hour and forty-five minutes passing so quickly or ever enjoying an arena gig so much.
The quality of Alfie's voice in loud rock songs, powerful arias and soft ballads is just breathtaking. God knows, I'll never have one ounce of his singing ability, but he will forever be the singer I will aspire to that's for sure.

I would strongly recommend the man to anyone who enjoys quality singing and wants a guaranteed cracking night's entertainment. Alfie clearly doesn't want to be be pigeon-holed as a opera or musical theatre singer and on this evidence, that would be a cruel waste of his phenomenal talent.
If there are any tickets left for any of his tour dates do go see him! I promise you, you will not regret it!